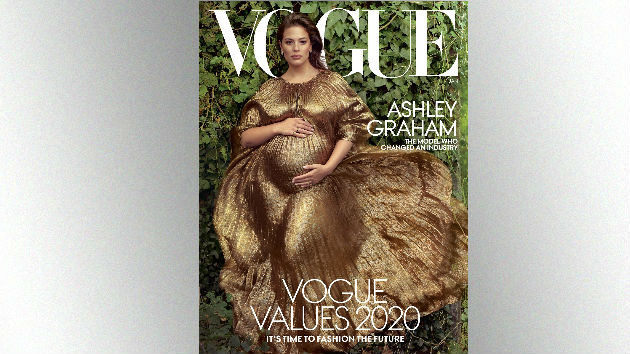 Her January issue cover, shot by famed photographer Annie Leibovitz, is the second powerful female to be featured as part of the magazine’s “Vogue Values” issue: Fashion designer Stella McCartney was the first cover revealed, and Little Women director Greta Gerwig will also be featured.

Graham first appeared on American Vogue in 2017, sharing the splash with Kendall Jenner, Gigi Hadid and other top fashion models.

For her part, Graham tells ABC Audio she’s stoked she’s got the cover to herself…sort of. “It’s almost my first solo Vogue cover,” she said, laughing heartily — considering her unborn son with Justin Ervin is also sharing the spotlight.

The honor reminds her, “…anything is possible for those who work hard and ask to get to where they are.”

Graham explains that even as someone who knocked down doors for body acceptance, being pregnant meant an attitude shift. “Oh, my gosh, it’s so ridiculous. I know, my kid isn’t even here yet and I’m already thinking about like, ‘What’s my body supposed to look like?"”

She adds, “I’ve been so thankful for the [mommy] community online because…this has not been an easy process for me, watching my body change. And the…mommy community has embraced me so much and I’m so thankful for them, because the tears that I have cried watching new stretch marks form, back fat form….But every mommy has said, ‘It’s OK, everything’s gonna be fine."”

As for the photos, Ashley admits she’s lucky: “I know, my first baby pictures, Annie Liebowitz shot me!”