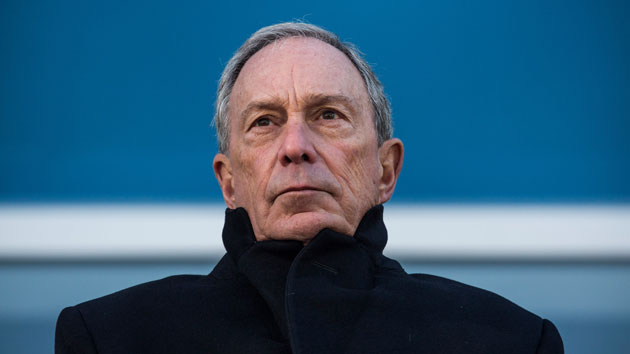 Andrew Burton/Getty Images(NEW YORK) — Just two weeks in since jumping into the 2020 race, billionaire and former mayor of New York City Mike Bloomberg has flooded the airwaves with huge ad buys.He has outspent on television advertisements more than all the top-polling Democrats combined– a figure that as of Tuesday evening reached $100 million, according to CMAG’s ad data.Bloomberg’s campaign is now unveiling two fresh ads – both aimed at drawing a sharp contrast to President Donald Trump. The first ad out on Tuesday focuses on Bloomberg’s record as jobs creator — casting him as the guy who “gets things done,” rebuilding New York’s economy as mayor after 9/11 – as opposed to Trump, who the ad suggests “spends his time tweeting” divisive rhetoric.The next thirty second spot, dubbed “Future,” shown first to ABC News, is set to air starting Wednesday, and suggests that Trump is harming the next generation. In the ad, Bloomberg promises progress on climate, health and gun safety. Both ads will run in select major markets beginning this week.The new ads “highlight Mike’s record as a leader who gets things done, and drive a sharp contrast with Donald Trump,” campaign spokesman Marc Lavorgna said.The campaign’s fresh ad batch comes as impeachment proceedings kick into higher gear at home; and abroad, the U.N. Climate Conference is hosted in Madrid, Spain which Bloomberg attended.“The reason that I am here in Madrid is very simple: I am here because President Trump is not,” Bloomberg said Tuesday, going on to discuss his philanthropic work fighting climate change.As he attempts to position himself as a leader on the world stage, Bloomberg’s late pursuit of the White House will face an unconventional route. He’ll aim to bypass the four traditional primary states and laser focus on delegate-rich Super Tuesday states.He’s likewise peppering those vital swing states with stump stops and commercials.After dropping $37 million on Monday, the former New York mayor added another $945,000 on Tuesday, bringing the total to $100.6 million, according to CMAG.More than $60 million of that has already gone up, blanketing the airways with than 57,000 spots in more than 200 markets across the country, including Los Angeles, New York, Houston and Miami.Bloomberg’s ad spending dwarfs all other Democratic primary candidates by far — including California billionaire activist Tom Steyer, who until this week had remained a top spender with $81 million on television as of Tuesday. Moreover, Bloomberg’s current $100 million hits the cap that Steyer’s campaign had set for itself at the outset.Sen. Bernie Sanders, I-Vt., has spent about $8.8 million on television ads since jumping into the air battle in October. Sen. Elizabeth Warren, D-Mass., has also spent about $8.7 million on airtime but much of that has been reserved for early 2020.Bloomberg has faced criticism from his fellow 2020 contenders for his large ad buys — some accusing him of “buying his way” into the election.“I don’t believe that elections ought to be for sale,” Sen. Elizabeth Warren, D-Mass., said in an interview on Bloomberg TV. “And I don’t think as a Democratic Party that we should say that the only way you’re going to get elected, the only way you’re going to be our nominee, is either if you are a billionaire or if you’re sucking up to billionaires.”Senator Kamala Harris, D-Calif., who suspended her 2020 campaign just as Bloomberg was embarking upon his own trail, fired a parting shot across the bow even as she made her exit.“My campaign for president simply doesn’t have the financial resources we need to continue,” Harris wrote in a letter to supporters. “I’m not a billionaire. I can’t fund my own campaign. And as the campaign has gone on, it’s become harder and harder to raise the money we need to compete.” Copyright © 2019, ABC Audio. All rights reserved.

US reaches debt limit amid showdown and ‘extraordinary measures’

Threats to Congress decreased after record high in 2021, but are still concerning: Police