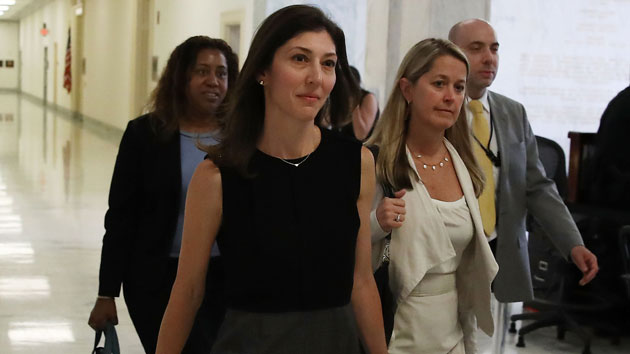 Mark WIlson/Getty Images(WASHINGTON) — Lisa Page, the former FBI lawyer who became embroiled in the Russia probe, sued the FBI and Department of Justice on Tuesday, alleging her privacy was violated by the release of texts she exchanged with former FBI agent Peter Strzok.She contends that, after the disclosure of the text messages, she was targeted by President Donald Trump and his allies.In the lawsuit, Page alleges the FBI violated the Privacy Act by disclosing “a 90-page document reflecting 375 text messages between Plaintiff and another FBI employee—to a group of reporters,” the suit says. Page’s suit says, that at the time, the text messages were under the review of the DOJ inspector general — who was investigating potential bias in the FBI’s investigation of Hillary Clinton’s email server.Page’s suit argues that the FBI did it in order to get in good standing with Trump, who has repeatedly mocked what he calls the “lovers” texts in tweets, at photo ops and at campaign rallies.”On information and belief, DOJ and/or FBI officials disclosed the messages to reporters for multiple improper reasons, including to elevate DOJ’s standing with the President following the President’s repeated public attacks of the Department and its head, Attorney General Jefferson B. Sessions III,” the suit says.Page alleges that the Justice Department summoned “DOJ beat reporters to the Department to review the messages at night, prohibiting the reporters from copying or removing the set of messages from the building, and instructing them not to reveal DOJ as the source,” she alleges. “This clandestine approach is inconsistent with the disclosure of agency records for transparency purposes or to advance the public interest.”Page says that although the inspector general found no bias in the Clinton email server investigation “Defendants’ unlawful conduct had turned Plaintiff into a subject of frequent attacks by the President of the United States, as well as his allies and supporters.”In the suit, Page quotes the president’s tweets especially pertaining to the recusal of former Attorney General Jeff Sessions, which Trump complained about repeatedly. Page’s suit says that DOJ purposely leaked the texts to The New York Times and The Washington Post – allowing the president to seize on the story, she alleges.Page also contends that at some point the text messages were supposed to go to “certain members” on the House Judiciary Committee, but when they were not in a position to read them, DOJ decided to provide the messages to reporters.The lawsuit calls the gathering of reporters “hardly routine” and that the DOJ officials plan worked.The suit also says that then Deputy Attorney General Rod Rosenstein was forced to admit that DOJ provided the texts to reporters, during his congressional testimony and former DOJ spokeswoman Sarah Isgur Flores acknowledged this in a tweet.”As the DAG said, after initial inquiries from Congress, the DAG consulted with the IG, and the IG determined that he had no objection to the Department providing the material to the Congressional committees that had requested it (discussion w IG was only about Congress),” she tweeted in December 2017.”After that consultation, senior career ethics advisors determined that there were no legal or ethical concerns, including under the Privacy Act, that prohibited the release of the information to the public either by members of Congress or by the Department,” Flores said.As Page notes in the lawsuit, the inspector general found that he found no political bias in the origins of the Hillary Clinton email investigation.On Monday, the Department of Justice inspector general report released Monday has determined the FBI’s investigation into Russian interference in the 2016 U.S. election was launched with an authorized purpose, despite significant allegations of wrongdoing in how agents handled the counterintelligence probe of the Trump campaign.The FBI and Department of Justice haven’t responded to ABC News’ requests for comment. Copyright © 2019, ABC Audio. All rights reserved.