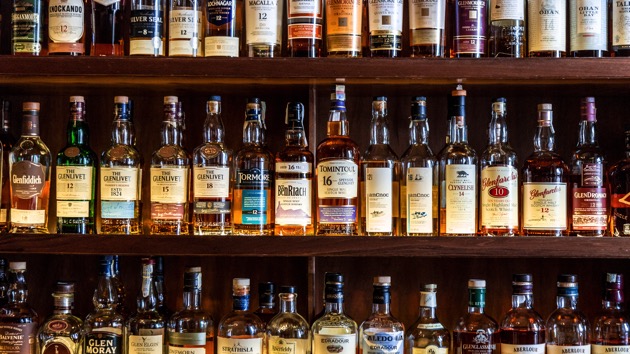 coldsnowstorm/iStock(NEW YORK) — A private whisky collection, considered to be the world’s largest, will soon go up for auction and could be yours — for a cool $10.5 million.The collection, named none other than “The Perfect Collection,” includes more than 3,900 bottles of primarily single malt Scotch whisky, according to a press release from the Scottish-based company Whisky Auctioneer. A handful of the bottles are valued individually at more than $1 million.Iain McClune, the founder of the company, called the lot “one of the most exciting discoveries in the whisky world.”The most coveted bottles include the 1926 Macallan, which holds the world-record for most expensive bottle sold and is estimated to go for up to $1.5 million; another Macallan from that same year that could reach a price tag of $1 million; and the 1919 Springbank, of which only 24 bottles were ever produced and is expected to sell for at least $237,000.In total, all the bottles are estimated to go for around $9.2 million to $10.5 million.The bottles were collected by Richard Gooding, a whisky aficionado who spent two decades cultivating the collection before his death in 2014. They had previously been stored in his Colorado home.Gooding’s goal was to have a bottle that represented every single distillery, according to his widow, Nancy Gooding.”Richard truly loved and was proud of his collection and enjoyed sharing it with friends and fellow Scotch lovers in his ‘pub’ at home,” she said in a statement.Gooding is said to have flown around the world to collect his bottles, which included both high-profile names and lesser-known gems.”It’s incredibly rare that a complete whisky collection of this size and value comes to auction at once, but it is the sheer diversity and comprehensiveness of Mr. Gooding’s collection that makes it so intriguing,” Becky Paskin, a whisky expert, said in a statement.The collection will be sold online in two auctions, one in February and another in April. Those interested are encouraged to register to keep up with the latest information. Copyright © 2019, ABC Audio. All rights reserved.

Gas prices could decide the midterms. Here’s why.