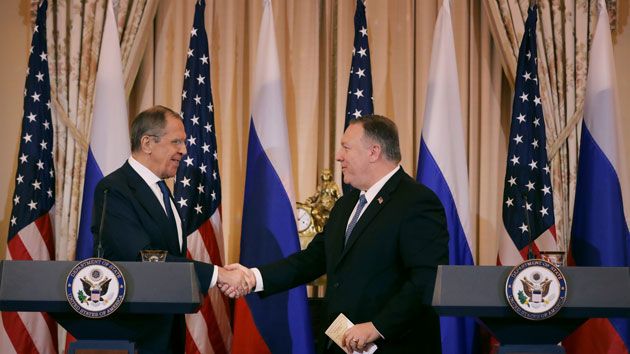 Chip Somodevilla/Getty Images(WASHINGTON) — Secretary of State Mike Pompeo on Wednesday pushed back on claims by Russian Foreign Minister Sergei Lavrov that President Donald Trump did not warn Russia against interfering in U.S. politics and elections, widening a spat over what was said in Lavrov’s second White House meeting with Trump.The Trump and Pompeo meetings with Lavrov on Tuesday have also come under fire for what critics say is the message they send to Ukraine, one day after the first talks between its new president, Volodymyr Zelenskiy, and Russia’s president, Vladimir Putin.While U.S. support for Ukraine has come into question amid the impeachment proceedings, and Zelenskiy still waiting for a White House visit as a sign of U.S. support, Russia’s top diplomat was given a private meeting with the president — and Trump tweeted a photo of them posing together with broad smiles behind the historic Resolute desk in the Oval Office.Trump has consistently called for improving U.S.-Russian relations despite a long list of disagreements between the two countries, from Libya to Syria, Venezuela to North Korea, arms control to diplomatic exchanges. But Russian interference in U.S. politics, including its cyber hack of the Democratic Party and selective leak of emails intended to hurt Hillary Clinton’s presidential campaign, has brought relations between the two nuclear powers to a low point.The White House said Tuesday that Trump warned Lavrov against Russian interference, hours after Pompeo publicly said during a joint press conference with Lavrov that he had done the same.”On the question of interference in our domestic affairs, I was clear: It’s unacceptable and I made our expectations of Russia clear,” Pompeo said. “Should Russia or any foreign actor take steps to undermine our democratic processes, we will take action in response.”But during his own news conference at the Russian embassy shortly after meeting Trump, Lavrov first said he and Trump never “even actually discussed elections.” Pressed by reporters, Lavrov — who has a history of obfuscating — contradicted himself, saying he raised the issue of elections by again denying any Russian responsibility and asking Trump to publish correspondence between the Kremlin and the Obama White House on the issue from late 2016.Russian officials have said they denied it at the time and offered to investigate the U.S. allegations of interference, appearing to believe that will exonerate them now, but Trump’s White House has so far refused to agree to publishing those.The White House has not responded to questions about the differing accounts, but when asked Wednesday, Pompeo said that Lavrov’s comments were “not accurately a reflection of my recollection of that meeting.””President Trump made clear in the meeting that he had with Foreign Minister Lavrov and the rest of the Russian team that was there that President Trump personally and America finds their meddling in our elections unacceptable,” he added.Trump has often downplayed or even outright denied Russia’s responsibility for the election interference.In June, during a meeting with Putin at the G-20 summit, Trump joked that “of course” he would tell Putin not to meddle in the 2020 presidential contest. With Putin laughing, Trump mock scolded him: “Don’t meddle in the election,” he said with a grin.The White House also said that Trump urged the Russian delegation “to resolve the conflict with Ukraine” — but it’s Russian aggression that has fueled that conflict, now in its sixth year and killing over 13,000 people, according to the UN Office of the High Commissioner for Human Rights, including over 3,300 civilians.Putin and Zelenskiy had their first meeting on Monday, along with France and Germany — a peace process called the Normandy format that has been frozen for years. The U.S. is not part of that process, but has supported the implementation of a peace agreement that it reached between Ukraine and Russia, but that has never been fully implemented.There was no major breakthrough, but progress seemed to be made, with promises of more prisoner exchanges and further talks.But in a striking symbolic move, it was the Russian foreign minister flying to Washington afterward to brief the Trump administration about those talks, not the Ukrainian. Lavrov was given another Oval Office meeting — the kind that Zelenskiy has sought as a show of U.S. support since his election in May. While Trump initially agreed to a meeting in Washington, Zelenskiy has still not had a White House meeting, although he and Trump met on the sidelines of the UN General Assembly in New York in September.”The optics couldn’t be any worse,” Andrew Weiss, vice president of Carnegie Endowment for International Peace told The New York Times, adding the Russians had managed to send “a message to the Ukrainians that they’re basically on their own now and need to cut the best deal they can since the U.S. backstop is largely inoperative.”It seems the administration has not yet been briefed on those meetings by the Ukrainians, although the State Department has not responded to requests for comment.It’s unclear why Lavrov was invited to Washington now. National Security Adviser Robert O’Brien told CBS News the White House visit was about “reciprocity” after Pompeo was received by Putin in May in Sochi, Russia.Pompeo said Tuesday he was tasked by Trump to try to improve relations and Lavrov’s visit was about continuing that: “We should have a better relationship – the United States and Russia – than we’ve had in the last few years, and we’ve been working on that since that moment.”Copyright © 2019, ABC Audio. All rights reserved.