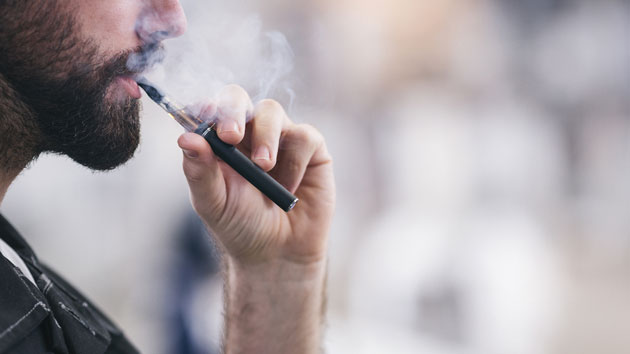 iStock(NEW YORK) — Recent deaths linked to vaping have, in the eyes of many, cast it as public health enemy No. 1, but a new report suggests vilifying vaping could do more long-term harm than good.In an article published Thursday in the journal Science, experts, including the deans of three U.S. public health schools, warned about a potential backlash from “prohibitionist” measures.Politicians have scrambled to react to the 2,291 lung injuries and 48 deaths linked to vaping reported by the Centers for Disease Control and Prevention as of early December.”As we move to confront these challenges, we face the danger that justifiable alarm will turn alarmist, short-circuiting careful analysis of the full range of evidence and focusing attention on the most frightening,” the authors wrote.Policy discussions have fallen short on multiple counts, the authors said, frequently failing to distinguish between nicotine and THC products, between adult and youth smokers, between retail and black market devices.The result has been catch-all policies, such as the blanket ban San Francisco is instituting on all nicotine-related vaping products in early 2020. But cracking down on e-cigarettes, while allowing traditional cigarettes to remain on the market, is the opposite of protecting public health, the authors wrote.Blanket bans may push e-cigarette smokers to the black market or back to smoking traditional cigarettes.”We seem to feel like the evidence has suddenly shifted, when in fact, it hasn’t,” said Amy Fairchild, lead author of the new article and dean of The Ohio State University College of Public Health. “We shouldn’t take our eyes off what the real problem is.”In comparison to the harms caused by e-cigarettes, traditional cigarettes are responsible for more than 480,000 deaths per year in the United States, according to the CDC.Put more simply, that’s 10,000 times the number of vaping deaths logged in the current lung injury outbreak.While that doesn’t mean that nicotine e-cigarettes aren’t risky, that risk is relative.Fairchild pointed to a 2018 report from the National Academies of Sciences, Engineering and Medicine, which found that completely substituting vaping nicotine for traditional cigarettes reduced smokers’ exposure to “numerous toxicants and carcinogens.”Notably, the report found that “across a range of studies and outcomes, e-cigarettes appear to pose less risk to an individual than combustible tobacco cigarettes.”The authors aren’t arguing that e-cigarettes are harmless, but they seem to be safer than their traditional counterparts.”I feel like this has been this watershed moment,” Fairchild said, in reference to the public’s cooling opinion of e-cigarettes. “But really there has been no smoking gun when it comes to the evidence.”So far, THC, the active ingredient in marijuana, and vitamin E acetate, an additive, have been most strongly implicated in the CDC’s investigation into lung injuries and deaths. The agency has neither let nicotine e-cigarettes off the hook, nor pinpointed them as a problem.That uncertainty is both a challenge and an inevitability, according to Fairchild.”We don’t have any drugs that are 100% safe and effective,” she noted. “We are always going to be making decisions in the face of uncertainty.”Americans have historically been slow to warm to the notion of harm reduction, which is the idea of substituting safer — although not necessarily safe — health behaviors, in place of riskier ones.”If you think about the history of our response to harm reduction, we’ve always been pretty skeptical of the idea that anything other than abstinence when it comes to addiction or dependence,” Fairchild said.Distinct problems need distinct solutionsSeparate from the lung injuries and deaths the CDC has been investigating is the issue of youth vaping.In recent months, states have sued e-cigarette manufacturers for marketing to youth, after the number of high school students who reported vaping skyrocketed between 2017 and 2019.But while youth vaping numbers have soared in recent years, youth smoking rates dropped faster during those same years, which suggests that e-cigarettes may be replacing traditional cigarettes among youth to a certain extent, rather than fueling a brand-new phenomenon, the authors argue.Much of the initial public outrage centered around novelty e-cigarette flavors, such as gummy bears, which seem obviously aimed at children, and which elicited emotional reactions from parents and lawmakers. Fairchild is more worried about menthol cigarettes.”If we are going to take policy action on flavors, menthol in combustible products must be the first target,” the authors wrote.More than half of youth smokers and more than 90% of African American youth smokers started smoking by using menthol products, according to the CDC.Instead of blanket bans on vaping, age-tailored interventions, like restricting sales of both vaping products and traditional cigarettes to adults 21 years old and older, and prohibiting predatory marketing to youth, “would be a tremendous step forward,” according to Fairchild.”Here we have the most deadly product that we can sell to human beings,” she said of traditional cigarettes, “and we allow them to buy it when they are still in high school.”Copyright © 2019, ABC Audio. All rights reserved.