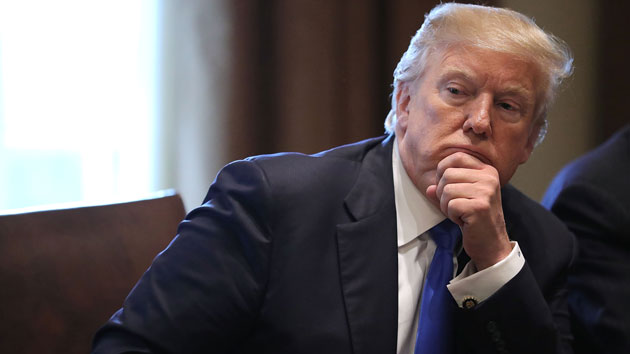 Chip Somodevilla/Getty Images(WASHINGTON) —  Just about an hour after the House Judiciary Committee Friday approved two articles of impeachment against him, President Donald Trump accused them of “trivializing” the constitutional process for political gain.Before a meeting with Paraguay’s president at the White House, Trump told reporters he had been working on a China trade deal but “got to see enough of it.”“You’re trivializing impeachment, and I tell you what, someday they’ll be a Democrat president and they’ll be a Republican House, and I suspect they’re going to remember it. Because when you do — when you use impeachment for absolutely nothing other than to try and get political gain.”

NEW: "You're trivializing impeachment," Pres. Trump says following House Judiciary vote passing articles of impeachment."Some day there'll be a Democrat president and there'll be a Republican House, and I suspect they're going to remember it." https://t.co/sDlLgu8EKC pic.twitter.com/t4zbKwnLJF

— ABC News Politics (@ABCPolitics) December 13, 2019 “I think it’s a horrible thing to be using the tool of impeachment, which is supposed to be used in an emergency and, it would seem, many, many, many years apart – to be using this for a perfect phone call where the president of that country said there was no pressure whatsoever, didn’t even know what we were talking about, it was perfect,” he said, referring to his July 25 phone call in which he pressured Ukraine’s president to investigate his political rivals.Democrats accuse him of “abuse of power” for doing so and “obstruction of Congress: for blocking their efforts to find out what happened.“To use the power of impeachment on this nonsense is an embarrassment to this country,” Trump said.Asked if he preferred a short or long Senate trial – if impeachment made it to that body – Trump praised GOP Sens. Lindsey Graham and Mitch McConnell’s views that a shorter trial is preferable, saying both he’d do “whatever I want’ and “whatever they want.”“I can do – I’ll do whatever I want,” Trump said. “Look, there is – we did nothing wrong. So, I’ll do long or short. I’ve heard Mitch, I’ve heard Lindsey – I think they are very much an agreement on some concept. I’ll do whatever they want to do, it doesn’t matter. I wouldn’t mind a long process, because I’d like to see the whistleblower, who’s a fraud.”

On whether he'd prefer shorter Senate trial, Trump says, "We did nothing wrong. So I'll do long or short. I've heard Mitch, I've heard Lindsey, I think they are very much on agreement on some concept. I'll do whatever they want to do. It doesn't matter." https://t.co/sDlLgu8EKC pic.twitter.com/q1hv5J6YEd

— ABC News Politics (@ABCPolitics) December 13, 2019 He went on to criticize, as he often does, House Intelligence Committee Chairman Rep. Adam Schiff as “crooked,” “a corrupt politician,” and “a disgrace” – and then mocked U.S. Army Lt. Col. Alexander Vindman, the National Security Council Ukraine expert who listened to the July 25 call, became alarmed, and reported his concerns..“Now, had I not had a transcript – I’m lucky we had this transcript, which by the way has now been verified by the lieutenant colonel – lieutenant colonel, OK? He’s another beauty.”Vindman was awarded a Purple Heart after being wounded by an IED while serving in Iraq.The president also said he also watched Thursday’s House Judiciary Committee markup session – “I got to see quite a bit of it yesterday” – and that he “watched these Democrats on the committee make fools out of themselves, absolute fools out of themselves.He said people “are absolutely disgusted” but he was benefiting.“It’s a very sad thing for our country, but It seems to be good for me politically,” Trump said.On Friday morning, one of the key players in the impeachment investigation — the president’s personal lawyer Rudy Giuliani — was caught on camera arriving at and then leaving the White House. While it wasn’t immediately clear why he was there, Trump has said Giuliani would be delivering a report to Congress and Attorney General William Barr on what he’s found while in Ukraine.“I hear he has found plenty,” Trump added, speaking about it last weekend.”The American people have already made up their mind on this #ImpeachmentScam,” Giuliani tweeted Friday.Copyright © 2019, ABC Audio. All rights reserved.