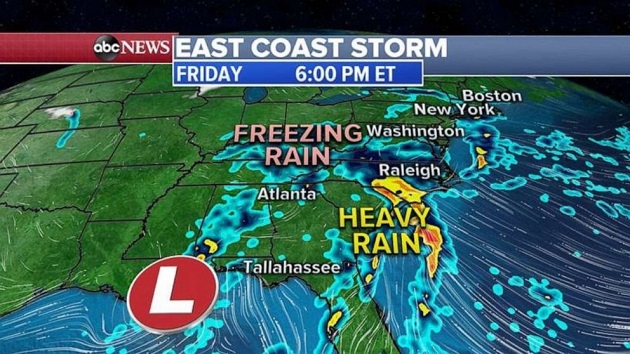 ABC News(NEW YORK) — Now that Arctic air is moving out of the Northeast, our attention turns to stormy weather on both coasts, with rain, snow and ice on both coasts Friday and into the weekend.In the East, a storm system will be moving from the Gulf Coast up the East Coast, with freezing rain along the Appalachians from North Carolina to Pennsylvania and heavy rain with a threat of flooding along the coast.On Friday morning, a winter weather advisory has been issued from North Carolina to Pennsylvania for freezing rain, sleet and some snow. Freezing rain will be the biggest issue because it can accumulate on trees and power lines, which could produce power outages. Also, very icy conditions are expected on the roads.Also Friday morning, a flood watch has been issued from Rhode Island to Maine for several inches of rain that will fall on frozen ground, which could create flooding.Later Friday afternoon, the storm system will be moving out of the Gulf of Mexico and will redevelop near the Carolinas’ coast into a coastal storm, bringing heavy rain to the area. Meanwhile, freezing rain will be falling all morning and into the afternoon along the Appalachian Mountains from North Carolina to Pennsylvania.Friday night into Saturday morning, heavy rain will spread into the Northeast with flooding possible, especially in New England where the ground is frozen so water has nowhere to go. Rainfall there could be 1-3 inches.In the meantime, a series of Pacific storms will ride the jet stream and bring heavy rain and snow through the weekend into the Western U.S.On Friday morning, 10 western states are under winter weather alerts for heavy snow from Washington to New Mexico.Some of the tropical moisture near the Hawaiian Islands is being picked up by the kink in the jet stream and pushed east toward the West Coast. In meteorology, we call this Pineapple Express of Atmospheric River.Through the weekend, 1-3 feet of snow is expected from the Sierra Range to the Rockies, where avalanche danger will be high.Along the Northern California coast and into Southern Oregon, some areas could see 2-3 inches of rain.