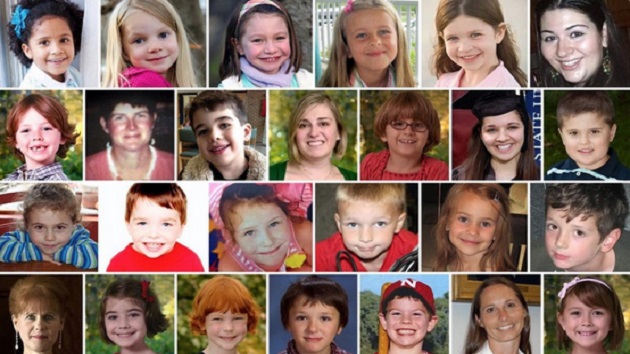 Twitter/@fred_guttenberg(NEWTOWN, Conn.) — Families of the victims of Sandy Hook commemorated the mass shooting’s seventh anniversary on Saturday with a stark reminder to the public: “[It] could happen to a kid you love.”Twenty-six people, including 20 children, were killed on Dec. 14, 2012, when a gunman entered the Sandy Hook Elementary School in Newtown, Connecticut, and opened fire.The gunman eventually fatally shot himself.Marie-Claude Duytschaever, who lost her 6-year-old grandson Noah Pozner in the shooting, penned an emotional but blunt blog post detailing what she said is the painful reality of mass shootings and gun violence.”I can tell you that had Noah died in his bed, the last seconds of his life wouldn’t have been filled with deafening noises, blood and terror. … That is the reality of gun violence. Not an abstraction. Not a statistic,” she wrote.”What happened to Noah and nineteen other first graders in a peaceful little New England town ten days before Christmas seven years ago could happen to a kid you love,” her post read.Nicole Hockley, whose 6-year-old son Dylan Hockley was killed in the tragedy, detailed how she heard about the shooting seven years ago.When she was in a class, a call came from a friend, she wrote on Twitter.”A shooting at our school. She was scared and asked me to go find her son,” she wrote. “I collapsed to the floor. Friends picked me up and one drove me to the school.”At Sandy Hook, she found her eldest son, who was 8 at the time, and her friend’s son.”I did not find Dylan,” she said.”Seven years ago started as a normal Friday morning,” Hockley said. “And nothing has ever been normal since.”Hockley has since co-founded the Sandy Hook Promise, a non-profit aimed at minimizing gun violence across the country.Numerous others also spoke out in light of the anniversary, including a father who lost his daughter in the Parkland mass shooting and Gabrielle Giffords, the former congresswoman who was shot in the head in a shooting that left 12 others wounded in Tucson in 2011.Fred Guttenberg, whose 14-year-old daughter Jaime Guttenberg was killed in the Stoneman Douglas High School shooting in Parkland, Florida, wrote that both incidents show “why we must defeat the gun lobby and focus on gun safety.””Your lives and your safety are worth it,” he rote on Twitter.Giffords said prior to the Newtown shooting, “I thought I’d felt pain and loss without parallel, but Sandy Hook shattered my heart.”Giffords, like Hockley, has also become a gun reform activist.”They were children. We failed to keep them safe,” she wrote. “And so I said enough.”Copyright © 2019, ABC Audio. All rights reserved.