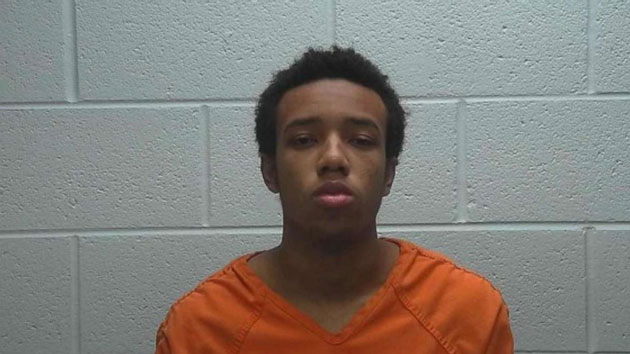 Indiana State Police Department(STEUBEN COUNTY, Ind.) — A man with a homemade license plate drawn with crayon on a paper grocery bag was arrested after Indiana State Troopers stopped to lend the stranded motorist a helping hand.Officers Craig Woodcox and Zarek Finley were driving along the I-80 Toll Road in Steuben County, Indiana, at approximately 2:30 p.m. on Thursday afternoon when they saw a man standing next to a Toyota Corolla on the side of the road tending to a flat tire.But when the Indiana State Troopers pulled over to help the man, things began to quickly unravel.The man identified himself as Joshua Lewis-Brown, 20, from Rochester, New York and told the officers that he was unable to change the tire and needed a tow truck. But when Woodcox and Finley were about to oblige his request, they noticed that the license plate was hand-written in crayon on a paper grocery bag.The police then ran a check on the vehicle using the Vehicle Identification Number rather than the license plate which ended up leading to even more suspicion.“Woodcox discovered the Toyota had been reported as stolen out of State College, Pennsylvania the day prior. The Troopers’ also found that Brown had never been licensed to operate a motor vehicle in any state, and was currently on probation for Grand Larceny,” the Indiana State Police said in a statement.Finley then placed Lewis-Brown under arrest and he was subsequently booked into custody and charged with Possession of Stolen Property, a Level 5 Felony, and Operating Without Ever Obtaining a License, a Level C Misdemeanor.According to the Indiana State Police as reported by authorities in Pennsylvania, it is alleged that the vehicle had been stolen when the owner left it unattended and unlocked with the engine running in order to keep the car warm outside of a local grocery store in Pennsylvania. But when the owner made his quick purchase and left the store he found that his vehicle was missing.Brown will be held on the Indiana charges, and then will face extradition back to Pennsylvania pending their local charges. Copyright © 2019, ABC Audio. All rights reserved.