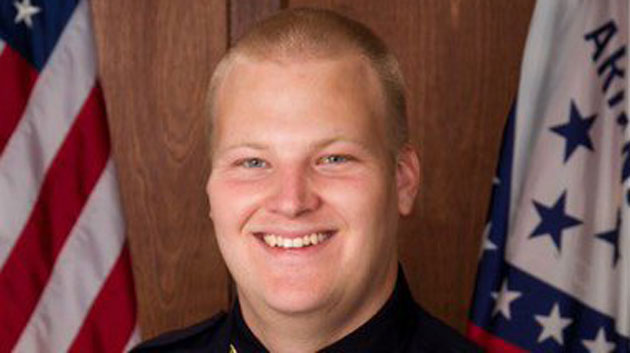 Fayetteville Police(FAYETTEVILLE, Ark.) — Surveillance videos that captured the “heinous,” execution-style killing of a police officer just outside an Arkansas stationhouse have been released by authorities.The Washington County Sheriff’s Office on Friday reluctantly released the preliminary findings from the state’s medical examiner’s officer and a series of surveillance videos that showed the sequence of events surrounding the killing of Fayetteville Police Officer Stephen Carr earlier this month.”We have hesitated to release the attached video of what transpired that night due to the heinous and shocking nature of this crime, but in an effort to keep the public informed of exactly what happened that night, we are releasing video of the incident,” according to the sheriff office’s Facebook post. “Our concern, first and foremost, is for the family of Officer Carr, so prior to sharing any of this information publicly, it was first shared with them.”Carr was sitting inside of a patrol car in the back parking lot of the precinct stationhouse on Dec. 7 when video shows a man behind the police cruiser he was in and opens fire.Carr was shot 10 times in the head and died at the scene, police said.The slain officer was 35 years old.Officers from inside the police stationhouse immeidately responded to the gunfire and pursued the shooter — whom authorities identified as Landon T. Phillips — and gave chase with their guns drawn, the video shows.At some point, Phillips exchanged gunfire with the officers before he was fatally shot, police said.Phillips had a one full box of ammunition containing 50 rounds and one partial box of ammunition containing 32 rounds, police said.A preliminary investigation found that Phillips fired 16 shots and reloaded the gun with another clip that had another 17 rounds, police said. It also pointed to a possible motive.”Searches of the assailant’s social media accounts indicate he was interested in anti-law enforcement groups,” according to a statement on the department’s Facebook page.The officers who fatally shot Phillips were placed on paid administrative leave in compliance with department policy until the police chief can review the investigation.