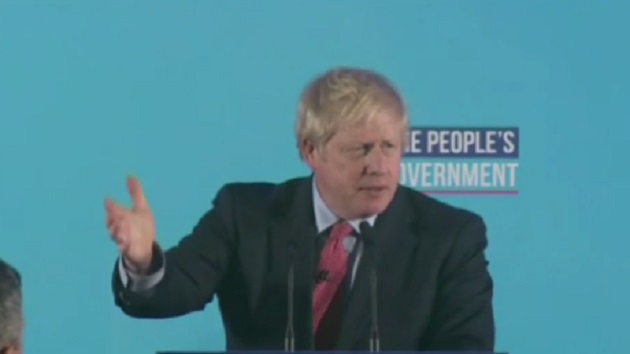 ABC News(LONDON) — The Labour Party may not be the only big loser in last week’s U.K. election.After U.K. Prime Minister Boris Johnson’s landslide election victory on Thursday, the BBC is facing losing significant amounts of its government-sourced income.The media organization could possibly lose between 5% to 75% of its total revenue after coming under criticism for purported bias from both the left and the right in the days since the Conservative Party’s election triumph.Founded in 1922, the BBC maintains independent control of its broadcasting and must remain politically neutral. The government has oversight of the media outlet, which employs over 2,000 journalists and produces substantial entertainment programming.Despite its charter to remain politically impartial, Johnson and his allies have attacked the organization for its allegedly biased coverage of his election campaign. Among his office’s criticisms, according to a report by the Guardian, were broadcaster Andrew Neil’s criticism of Johnson dodging interviews and coverage of a 4-year-old boy made to sleep on a hospital floor.Throughout his campaign, Johnson also attacked the way the state-funded media organization receives its cash.The BBC collects most of its capital through government-levied television licenses. In order to watch TV in the U.K., viewers must pay £154.50 a year — about $205. If a person fails to pay, he or she faces criminal prosecution and up to a £1,000 ($1,329) fine.”You have to ask yourself whether that approach to funding a media company still makes sense in the long term given the way that other organizations manage to fund themselves,” the prime minister said during a campaign stop last week.The fees generate about £3.6 billion ($4.79 billion) for the broadcaster, about three-fourths of its total revenue. An independent government review of the BBC’s funding practices in 2015 recommended “no fundamental change(s)” to its license fee model.The report also found that without the government’s enforcement of the fee, the organization could lose up to £200 million ($266 million), almost three times the amount its news channel costs.In order to remove funding from the BBC, Johnson must pass legislation through the House of Commons. After Thursday’s election, he holds an 80-seat majority in the body.On Sunday, Conservative Treasury official Rishi Sunak told the BBC that Johnson had ordered a review of television licensing fees. “That is something the prime minister has said we will look at and has instructed people to look at,” he said.The prime minister’s office also announced that Conservative cabinet members will boycott the BBC’s radio show “Today.”The Times of London reported that Johnson launched the review and boycott as punishment for what he sees as anti-Brexit bias in the organization. In June, Johnson jokingly called the BBC the “Brexit Bashing Corporation.”However, the Conservatives are not the only British political party accusing the BBC of bias. The Labour Party has attacked the BBC in recent days for bias against their left-wing leader, Jeremy Corbyn.A top Labour politician, Andy McDonald, said in a BBC interview that the organization “played a part” in his party’s loss Thursday.”If the BBC are going to hold themselves out as somehow having conducted themselves in an impartial manner, I think they’ve really got to have a look in the mirror,” he said.Still, others in the British media have rushed to defend the BBC amid the criticism. The Evening Standard, edited by former top Conservative politician George Osborne, published an editorial saying, “Britain is much better off with the BBC than without it.”Huw Edwards, who anchored the BBC’s election night coverage, has pushed back against claims of bias. Writing in a post on LinkedIn, Edwards said, “The real purpose of many of the attacks is to undermine trust in institutions which have been sources of stability over many decades. The apparent purpose, in short, is to cause chaos and confusion.””The BBC is far from perfect, but it can play a very valuable role in promoting the better path,” he added.In polling released Monday, YouGov found that less than half of the British population said they believe BBC news journalists are honest and impartial.

One dead, 12 injured after car plows into crowd in Berlin, police say