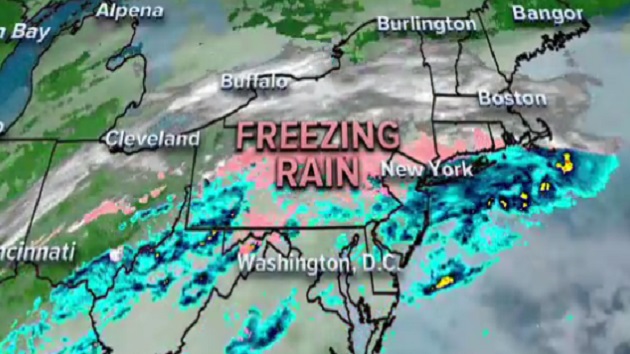 ABC News(VERNON PARISH, Louisiana) — The coldest air of the season is heading to the Northeast after at least three people were killed from rough storms in the South.A husband and wife died in Lawrence County, Alabama, according to the coroner, and a 59-year-old woman was killed in her mobile home in Vernon Parish, Louisiana, according to the sheriff, when reported tornadoes struck the region.Up to 27 tornadoes were reported in Alabama, Mississippi and Louisiana on Monday.A tornado watch remains in effect in Florida, Georgia and Alabama until Tuesday afternoon.That storm is now stretching from the Gulf Coast to New England, and 17 states from Illinois to Maine are under snow, ice and flood alerts.On Tuesday, freezing rain is hitting Pennsylvania, New Jersey, New York’s Hudson Valley and Boston.Ice accumulation is possible on trees and power lines, and the icy mess will make driving treacherous throughout the day.Some snow is going to fall north of the freezing rain in upstate New York from Buffalo to Albany, into western Mass and VT, NH and ME, where locally 6” of snow is possible by the end of the dayAs the storm moves out of the Northeast by late Tuesday night, an arctic cold front will move in on Wednesday afternoon, which will send temperatures plunging Wednesday night.Thursday morning will bring the coldest air of the season for the Northeast. Wind chills are forecast to fall to minus 8 degrees in Syracuse, minus 4 degrees in Boston, 0 degrees in New York City and 11 degrees in Washington, D.C.