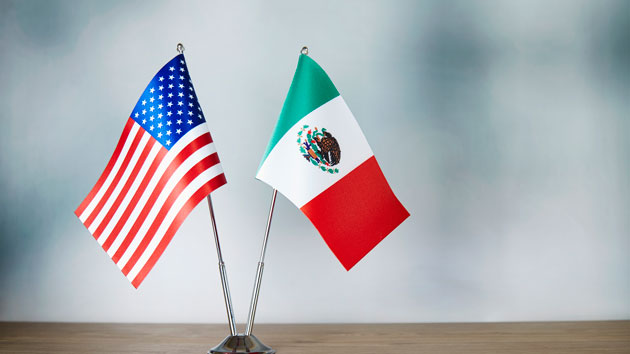 atakan/iStock(WASHINGTON) — The U.S. Department of State has issued a travel advisory to Mexico because of an increased risk of violent crime in some parts of the country.Violent crime, such as homicides, kidnappings, carjackings and robbery, are “widespread” and the U.S. government “has limited ability to provide emergency services” to Americans in many areas, according to the advisory.Americans are being advised not to travel to the states of Colima, Guerrero, Michoacán, Sinaloa and Tamaulipas due to crime.In Guerrero state, armed groups operate independently of the government in many areas and frequently maintain roadblocks and may use violence toward travelers, according to the U.S. government. Criminal organizations are operating in Sinaloa state, where violent crime is widespread. In Tamaulipas state, organized crime activity, including gun battles, murder, armed robbery, carjacking, kidnapping, has led to disappearances, extortion and sexual assault.The State Department is also advising U.S. citizens to reconsider travel to the states of Chihuahua, Coahuila, Durango, Jalisco, Mexico state, Morelos, Nayarit, Nuevo Leon, San Luis Potosi, Sonora and Zacatecas due to crime.If Americans travel to Mexico, they are advised to keep their traveling companions and family back home informed of their travel plans, and if separated from their travel group, to send a GPS location. If taking a taxi alone, text a photo of the taxi number and license plate to a friend or family member.The State Department also recommends using toll roads when possible and avoid driving at night, as police presence and emergency services are extremely limited outside the state capital.Americans should also exercise increased caution when visiting local bars, nightclubs and casinos and avoid displaying signs of wealth, such as wearing expensive watches or jewelry. In addition, they are advised to be extra vigilant when visiting banks or ATMs.As an extra precaution, the Department of State recommends that travelers enroll in the Smart Traveler Enrollment Program to receive alerts and make it easier to be located in an emergency as well as preparing a contingency plan for emergency situations.Travel by U.S. government employees to certain areas is prohibited or significantly restricted. Government workers may not travel between cities after dark, hail taxis on the street, including from app-based services like Uber or from regulated cab stands, according to the advisory. They also may not drive from the U.S.-Mexico border to or from interior parts of the country, with the exception of daytime travel within some parts of Baja California. Copyright © 2019, ABC Audio. All rights reserved.