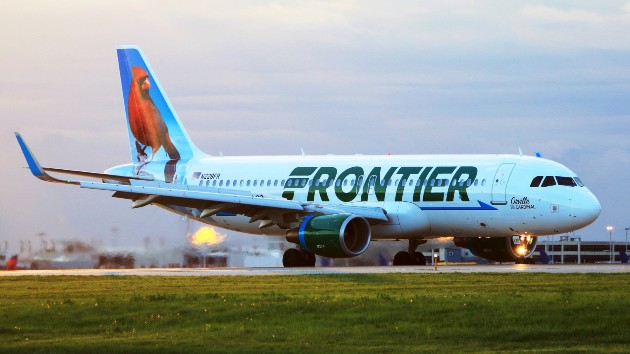 Laser1987/iStock(NEW YORK) — U.S. Army veteran Lena Ramsay said she was relaxing in the darkened cabin of a late night flight when she suddenly felt the hands of the person seated behind her reach up and grope her. Ramsay alerted a flight attendant, she told ABC News, but said that she was instructed to return to her seat. On Monday, Ramsay and another passenger who said she suffered similar unwanted groping filed a class-action lawsuit in Colorado federal court against Frontier Airlines, claiming that airline employees mishandled multiple cases of in-flight sexual assault. The lawsuit alleges that Frontier “fail[ed] to have and/or follow policies and procedures to prevent, report, and respond to sexual assault of its passengers on its flights.” While the problem of unwanted sexual assault on airline flights is not new, the class action that Ramsay and others filed appears to be the first of its kind, according to Ramsay’s attorney, Tyler Fox.In fiscal year 2014, 38 cases of in-flight sexual assault were reported to the Federal Bureau of Investigation (FBI), a figure that increased to 63 cases in the 2017 fiscal year, according to an FBI advisory on in-flight sexual assault published in the spring of 2018. “The attacks generally occur on long-haul flights when the cabin is dark,” the report cautioned. Ramsay’s attorney believes the airlines are not doing enough to prevent in-flight sexual assaults before they happen. “From my research and talking to other attorneys that have handled these kind of claims, the airlines seem to handle them in a piecemeal fashion, despite the FBI’s advisory, particularly with respect to the red-eye flights,” Fox, a Cambridge, Massachusetts-based attorney, told ABC News. “It’s clear that nothing that any or all the airlines are doing is changing or preventing the sexual assaults, so it seemed to me that the necessary and the best way to get them to do something to protect consumers, in this airline passengers, [is] a class action to get injunctive relief.” Over the course of his investigation, Fox, who specializes in sexual assault cases, said that he determined that it’s not uncommon for alleged perpetrators to walk off the plane after an accusation of violative behavior, and that few policies exist among U.S. airlines to prevent such incidents from happening or address them properly when they do. In the class action complaint, Ramsay alleges she was sexually assaulted on a Frontier flight from Denver to Providence, Rhode Island in October 2018. She claims that she reported the incident to a flight attendant, who she said refused to let her move to a seat away from her alleged assailant. The flight attendant failed to either report the incident to airline superiors or request that law enforcement officials in the arriving city be contacted. Additionally, the suit claims that Frontier officials subsequently failed to provide either her or law enforcement officials with the identity of her alleged assailant, or provide the names of potential witnesses who may have observed the incident she described to ABC News. “I was completely humiliated and at a complete loss,” Ramsay told ABC News. “You’re in an enclosed space, you just want to get away and I went to the people who I thought would make it alright and they didn’t.”Ramsay said in an interview that she watched as the flight attendant she had reported the incident to assisted the perpetrator off the plane. Ramsay said she next alerted the pilots, whom she said alerted local law enforcement and the U.S. Transportation Security Administration (TSA), which oversees airline security. Fox and Ramsay eventually contacted the FBI, they said, but ultimately no criminal charges were filed. A spokesperson for the FBI’s Boston field office declined to comment on the lawsuit, and a spokesperson for the Massachusetts U.S. Attorney’s office did not immediately respond on Tuesday night to a similar ABC News request for comment.Another plaintiff in the lawsuit, identified in court papers only as Jane Doe, alleges that she was sexually assaulted on a Frontier flight from Denver to Florida in Nov., 2018. She, too, reported her assault to a flight attendant, who also allegedly failed to report the complaint to superiors or contact law enforcement officials, according to the complaint. Doe also alleges that Frontier failed to provide her with the necessary information to identify the alleged perpetrator or potential witnesses. Frontier Airlines declined an ABC News request for comment on the specific claims of the suit, citing the pending litigation, but issued a statement asserting that “the safety of our passengers and crew members is our number one priority at Frontier Airlines and we have strict policies in place to proactively and appropriately respond to reports of misconduct and alleged crimes.”

Southwest Airlines holiday meltdown will cost company up to $825 million