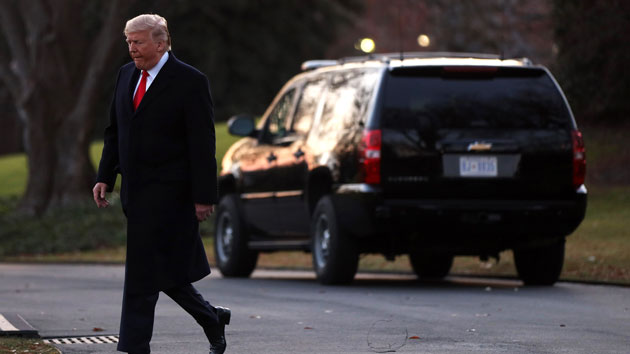 Alex Wong/Getty Images(WASHINGTON) — Hours away from potentially becoming just the third president in United States history to be impeached by the House of Representatives, President Donald Trump is leaving Washington, D.C., on Wednesday for the comfort of the campaign trail.Setting up what could be a historic split screen, Trump’s last campaign rally of the year in Battle Creek, Michigan, is shaping up to coincide with the House vote on the two articles of impeachment facing the president.”It will be an amazing contrast,” Trump campaign spokesperson Tim Murtaugh tweeted Tuesday night.The reelection team expects he’ll be in rare form on stage at the Kellogg Arena in Michigan, a state that was crucial to Trump’s 2016 victory and where supporters have been lined up for hours ahead of Wednesday’s event.And if the president’s behavior leading up to the impeachment vote is any indication, rallygoers may be in for an explosive night. In the days leading up to Wednesday’s House impeachment vote, the president has publicly lashed out both in new and familiar ways.He sent a vicious letter railing against impeachment as an “illegal, partisan attempted coup” to House Speaker Nancy Pelosi on the eve of the impeachment vote. “One hundred years from now, when people look back at this affair, I want them to understand it and learn from it, so that it can never happen to another President again,” the letter read.And while members debate impeachment on the House floor Wednesday, the president has dozens of tweets or retweets on his account, including an all-caps tweet just after White House press secretary Stephanie Grisham said the president was “working all day.”“SUCH ATROCIOUS LIES BY THE RADICAL LEFT, DO NOTHING DEMOCRATS. THIS IS AN ASSAULT ON AMERICA, AND AN ASSAULT ON THE REPUBLICAN PARTY!!!!” Trump tweeted.According to those close to him, the president has been described as upset and angry about facing impeachment, despite allies suggesting it could work out for him politically in the end.Trump’s reelection campaign has also ratcheted up the rhetoric ahead of Wednesday’s vote, blasting out fundraising emails that take cues directly from the president.In one fundraising email sent to millions of Trump’s supporters, the campaign quotes portions of the president’s six-page letter to House Speaker Nancy Pelosi calling impeachment an “open war on American democracy” and insisting more due process was afforded to those accused in the Salem Witch trials.”Before the upcoming vote, I want to post another HUGE fundraising number to ensure that we have the resources to win this IMPEACHMENT WAR,” the fundraising email states.Since Pelosi launched the impeachment inquiry in September, the president’s campaign has progressively ramped up its language pushing back against House Democrats.Earlier in December, ABC News reported the campaign was running misleading Facebook ads and sending fundraising emails implying that House Democrats were pushing “treason” allegations against Trump in the ongoing impeachment inquiry.The campaign revealed over the weekend that they had raised $10 million in small-dollar donations last week amid the ongoing impeachment push.Copyright © 2019, ABC Audio. All rights reserved.