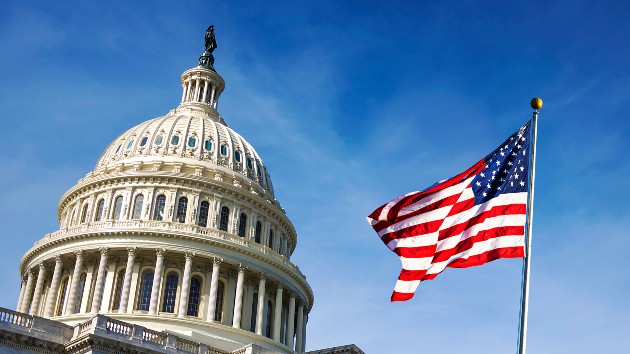 rarrarorro/iStock(WASHINGTON) — President Donald Trump is considering a mix of White House lawyers and some of the president’s most aggressive defenders serving in the House of Representatives to play a larger role in his defense, multiple sources familiar with the internal discussions told ABC News. The debate over who could best represent the president in the Senate comes as the president’s advisers have squabbled about what his impeachment defense before the Senate should look like, and who should be responsible for making the case for acquittal, the sources said.GOP Reps. Jim Jordan, John Ratcliffe and Mark Meadows are under consideration by the White House, along with Ranking Member of the House Judiciary Committee Doug Collins and Rep. Elise Stefanik. The members could be used in what once source described as a “support role” to counter the arguments made by the House impeachment managers — those members presenting the House case for his removal during the Senate trial. The House impeachment members have yet to be named by Speaker Nancy Pelosi.“Having House members go against House members, whether it be in public or in the media, is seen as a competitive strategy,” one GOP lawmaker told ABC News. On the White House front, despite no formal team being named to represent Trump in a Senate trial, the president dispatched White House counsel Pat Cipollone to Capitol Hill last week for a meeting with Senate Majority Leader Mitch McConnell to plot the next phase.Sources have told ABC News that the president is considering adding controversial attorney Alan Dershowitz to his team and that Dershowitz has privately made clear to the White House he is willing to help the president’s defense. The move that has been publicly pushed by Rep. Mark Meadows, a close ally of the president.Dershowitz, who was often called upon by the White House and the president’s attorneys to appear on television during the Mueller investigation, has been in the headlines due to his ties to now-deceased accused child trafficker Jeffrey Epstein. Dershowitz was a member of a star legal team that represented Epstein during his multiple investigations beginning in the mid 2000s. Virginia Roberts Giuffre has alleged in courts documents that she was lent out to Dershowitz for sex by Epstein. Dershowitz has vehemently denied those accusations.Trump has publicly advocated, and some aids have discussed, the idea of putting on a long and vigorous defense in the Senate. That defense would include a laundry list of hand-selected witnesses to vouch for the president’s innocence.The president has suggested that he would allow some of his top administration officials — whom he blocked from testifying in the House impeachment probe — to take the stand when the impeachment process jumps to the Senate. “It would be fair in the Senate,” Trump said earlier this month.“I would love to have Mike Pompeo and Mick and I would love to have Rick Perry, and many other people testify. But I don’t want them to testify when this is a total fix. You know what a fix is? It’s a fix. Just think if it,” he said referring to the process in the House of Representatives. Senate Majority Leader Mitch McConnell on Tuesday flatly rejected Minority Leader Chuck Schumer’s call for a deal on live witnesses at Trump’s impeachment trial — at least before the trial starts. In a Senate floor speech responding to Schumer, McConnell made it crystal clear that he is not inclined to call in witnesses — but he didn’t rule it out either. Copyright © 2019, ABC Audio. All rights reserved.