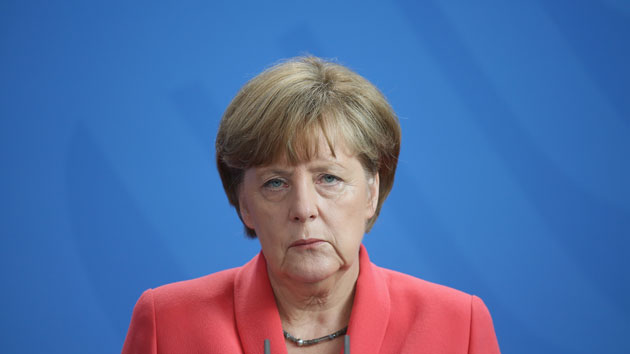 Sean GallupGetty Images(LONDON) — Angela Merkel’s center-right party, the Christian Democratic Union (CDU), has been rocked by accusations that several of its officials maintain ties to far-right, survivalist groups with neo-Nazi links.These allegations come as Germany has experienced several high profile, far-right terrorist attacks, including the killing of pro-refugee CDU politician Walter Luebcke, and the Yom Kippur attacks on a synagogue in Halle.Last week, Robert Möritz, a CDU official in an east German state, verified his membership in Uniter, a group claiming it is a support network for active and former members of German security forces.While a legally registered association, Uniter’s links to far-right, survivalist groups have gained significant media attention recently.Several of the organization’s online chat rooms, set up by its leader, Andre Schmitt, who is currently standing trial for weapons and explosives violations, contain subgroups where members discuss preparing for the end of the established world order.Some of these chats, according to the Guardian, consider the threat of Islamic terrorist attacks, planning to confront them by hoarding weapons, food and supplies.On Sunday, Möritz said he canceled his Uniter membership, writing in a statement, “Please grant that I have evolved as a person and a human being.”However, his social media presence also showed that he participated in a 2011 neo-Nazi rally in the same city where a white supremacist attacked a synagogue this year.Critics point out that the politician also has a black sun tattoo, a symbol embraced by far-right groups.In recent days, other regional CDU officials have been linked to Uniter. Kai Mehliss, who also serves in the same regional branch of the CDU as Möritz, is listed as a member according to a report from the Guardian.Despite a growing public backlash against Möritz, his regional CDU has refused to expel him from the party. Last week, the local party unanimously backed him, saying in a statement that Möritz has distanced himself from extremist tendencies.Still, the accusations have unsettled political parties serving in fragile regional coalitions with the CDU.The Greens, serving in a coalition with Merkel’s party in Möritz’s state of Saxony-Anhalt, released a statement saying, “How much space for swastikas is there in the CDU?””We believe that the national CDU … should intervene and make clear that this is unacceptable,” Saskia Esken, the leader of the center-left Social Democratic Party (SPD), told reporters Monday.”We take resolute and uncompromising action against all forms of right-wing extremism,” Annegret Kramp-Karrenbauer, the leader of the CDU, said while visiting German troops stationed in Cyprus this week.”If it turns out that this trust has been misused, then I believe that the appropriate consequences must also be drawn,” she added.If the CDU’s coalition with the SPD and Greens falls apart in Saxony-Anhalt, the party would likely have to choose between a minority rule and governing with the far-right Alternative for Deutschland (AfD) party.“(The CDU is) getting itself into deep trouble with losing voters. And so they’ve got to figure out how they reestablish their credibility,” Jeffrey Gedmin, editor of the American Interest, told ABC News.“If they don’t have options, then it will look for some to be more compelling to work with the AfD,” he added.The CDU currently outlaws any regional party working with the AfD. However, with Merkel announcing that she will leave office in 2021, many observers are watching which political path her party will take.While her successor, Kramp-Karrenbauer, comes from the liberal wing of Merkel’s party, others in the CDU would like to head in a different direction.At last week’s party conference, Saxony-Anhalt’s CDU said it would not form a coalition with the AfD, but it did not rule out entering one in the future.“There are two sides to the debate. One side says we better stay completely away from the AFD, they’re contaminated, they’re poisoned. The other side says but look, if you want to win elections and you want to govern … you have to start making compromises and figure out who can you work with,” Gedmin said.Merkel’s government has worked in recent weeks to confront growing far-right extremism in the country. Germany’s Interior Minister Horst Seehofer announced this week new measures to fight right-wing terrorist cells, including adding 600 new intelligence positions created to identify and dismantle such groups.German federal statistics show that far-right extremists carried out half of all politically-motivated violence in 2018. Figures obtained by Tagesspiegel newspaper also count 32,000 Germans as active in extremist groups, up 30% from the year before.The German government plans to also confront the rise of the far right in security services. This year, an elite commando unit was revealed to have members of an extremist survivalist network gearing up for a race war.With Europe preparing to commemorate the 75th anniversary of the liberation of the Auschwitz concentration camp next month, the far-right’s rising tide still haunts Germany. Copyright © 2019, ABC Audio. All rights reserved.