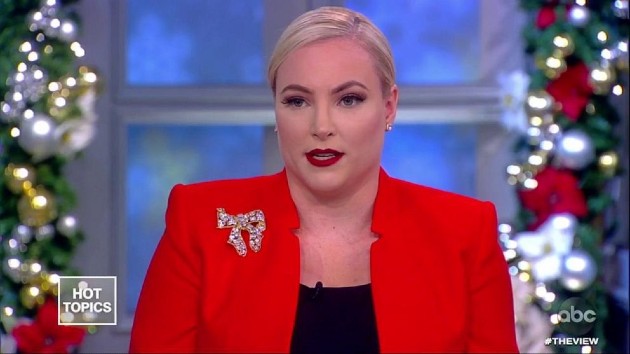 ABC(NEW YORK) — Meghan McCain, no stranger to attacks on her family from President Donald Trump, voiced support for Rep. Debbie Dingell after Trump mocked her and her late husband, Rep. John Dingell, at a rally Wednesday night. “There’s a specific kind of horrific monstrosity in this man that does this type of thing to widows,” McCain said Thursday on ABC’s The View. “We’re all with her on this.” John Dingell, the longest serving member of Congress and a World War II veteran, died in February after serving more than 59 years in Congress. His widow, Debbie Dingell, assumed his seat when he stepped down in 2015 and Wednesday voted in favor of Trump’s impeachment.While the House of Representatives voted to approve two historic articles of impeachment against the president, Trump mocked Dingell at a rally in the Dingells’ home state of Michigan, claiming Dingell called him after her husband’s death. “‘It’s the nicest thing that’s ever happened, thank you so much, John would be so thrilled. He’s looking down, he’d be so thrilled. Thank you so much, sir,"” Trump claimed Dingell said to him. “I said, ‘That’s OK, don’t worry about it.’ Maybe he’s looking up, I don’t know,” Trump said, implying Dingell was in hell.Remembering Dingell as “an absolute lion on Capitol Hill,” McCain slammed Trump’s ridicule of the late congressman as “cruel,” saying he made the “pain of a family’s Christmas time grief exponentially worse.” McCain also called on Melania and Ivanka Trump to “get [Trump] in line when it comes to disparaging people.” “When you’re disparaging widows and people who have served the country, war heroes who have passed – again, I know something about it — until you get him in line, you are complicit in this as well,” McCain said.White House press secretary Stephanie Grisham defended Trump Thursday, saying in an interview with ABC’s Good Morning America that he “is a counter-puncher.” “He has been under attack, and under impeachment attack,” Grisham added. “Mr. President, let’s set politics aside,” Dingell tweeted Wednesday. “My husband earned all his accolades after a lifetime of service. I’m preparing for the first holiday season without the man I love. You brought me down in a way you can never imagine and your hurtful words just made my healing much harder.”Grisham said, “I am very, very sorry for her loss. And I would thank her and I would thank her late husband for all of the service to our country.” McCain’s father, Sen. John McCain, died in August 2018 of brain cancer. Trump criticized Sen. McCain throughout his 2016 presidential campaign and while in office, and in 2019, after his death, he continued to criticize the late senator.Copyright © 2019, ABC Audio. All rights reserved.