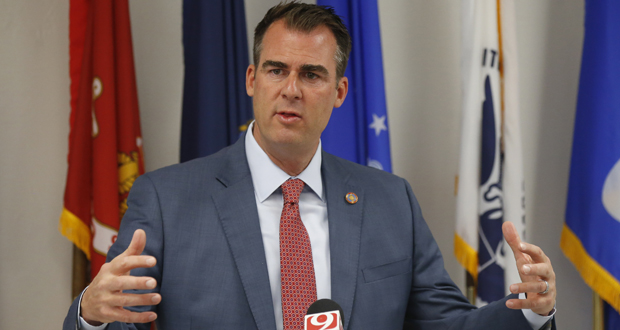 Oklahoma Gov. Kevin Stitt speaks to employees of The Boeing Company during a visit to the Oklahoma City facility Tuesday, May 14, 2019, in Oklahoma City. (AP Photo/Sue Ogrocki)

Days after Governor Kevin Stitt announced that he was changing course related to the renegotiation of the gaming compact, we’re getting a better look at the newly proposed deal.

Currently, Native American tribes pay Oklahoma more than $140 million a year in gaming exclusivity fees from casinos. However, some state leaders say it is time for that to change as first reported by KFOR 4.

Oklahoma tribes earn $4.5 billion each year thanks to casino-style gaming. Of that money, anywhere from 4 to 10 percent goes back to the state in exclusivity fees.

Since the 15-year deal between the state and the tribes is set to expire in January, Gov. Kevin Stitt recently sent a letter to 35 tribal leaders saying it is time to renegotiate the terms of the agreement.

The tribes have contended the compact automatically renews if new agreements aren’t reached, but the governor disagrees.

With two weeks until the deadline, Gov. Stitt announced that he was changing course.

“The state cannot reach an agreement that meets the needs of every tribe within the next 18 days,” Stitt said during a news conference on Tuesday.

Stitt said if an agreement wasn’t reached, that Class III gaming would be illegal in Oklahoma on Jan. 1, 2020.