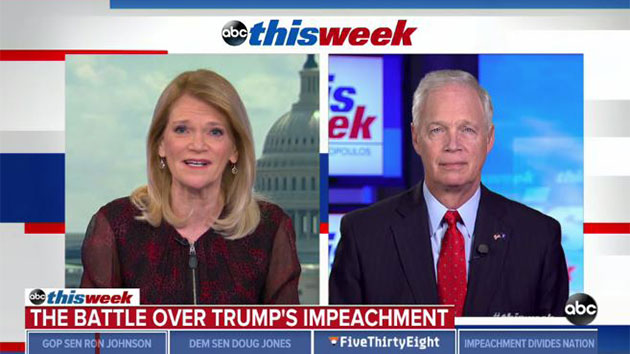 ABCNews.com(WASHINGTON) — Sen. Ron Johnson, R-Wis., said House Speaker Nancy Pelosi’s decision to withhold the articles of impeachment was “bizarre” and called the articles “pretty thin gruel.””This thing is kind of bizarre.They had to rush to this impeachment vote and then all of a sudden she’s sitting on it,” he said on ABC’s “This Week” Sunday. “I don’t think the Senate should be making the case the House should’ve made in their presentation.”The House voted to impeach President Donald Trump on Wednesday, making him the third president in U.S. history to be impeached.However, after the vote Pelosi said she would not formally send the articles of impeachment over to the Senate or name impeachment managers until she sees how a Senate trial would be structured. “Our Founders, when they wrote the Constitution, they suspected that there could be a rogue president. I don’t think they suspected that we can have a rogue president and a rogue leader in the Senate at the same time,” she said in defense of the decision during her weekly press conference on Thursday.Sen. Doug Jones, D-Ala., said on Sunday that he didn’t think it was unfair for Pelosi to delay sending articles of impeachment to the Senate, noting that during the Clinton impeachment the Senate received articles of impeachment three weeks after the president was impeached.”There’s nothing magic about moving these articles immediately,” he told “This Week” Co-Anchor Martha Raddatz. “I think what the speaker is doing is to say, ‘What are the rules going to be when I send House managers over there? What kind of playing field are we going to have? What is the timing of this?’ I don’t think that that’s unreasonable.”On Thursday, Senate Majority Leader McConnell said, “Some House Democrats imply they are withholding the articles for some kind of leverage so they can dictate the Senate process to senators.””I admit, I’m not sure what leverage there is in refraining from sending us something we do not want,” he added.Johnson, on “This Week,” added that he thought there was support in the Senate for a quick trial with no witnesses.However, he said, “I will support the president in the type of trial he wants and the types of witnesses he wants to bring.”Jones said Johnson made the case for why there should be witnesses in the Senate trial.”If he really believes it’s thin, it’s thin because the president of the United States ordered his top people who were in the room, who have first hand knowledge not to testify,” Jones responded on Sunday. “He ordered that documents not be turned over.” Later in the interview, Jones said, “we’re not going to be back for a while, I don’t think they’re slowing anything down.”The Democratic senator from Alabama also addressed the concern that voting to impeach Trump could put his seat in a deep red state in jeopardy.”Everyone wants to talk about this in the political terms — in the political consequences term,” Jones said. “This is a much more serious matter than that.” McConnell and Senate Minority Leader Chuck Schumer are at odds over whether the Senate trial should include witnesses. After meeting with Schumer late Thursday, McConnell said the two leaders “remain at an impasse,” but has also told senators to prepare to return for votes on Jan. 6.Meanwhile, the Trump administration has yet to release a single document subpoenaed by Congress during its impeachment inquiry of the president, but the administration was forced to hand over a second round of communications between two government offices that helped withhold $400 million in military aid to Ukraine.The documents were obtained on Friday by the Center for Public Integrity via an order by a federal judge as part of a Freedom of Information Act request to the Department of Defense and Office of Management and Budget.Susan Smith Richardson, CEO of Public Integrity, said in a statement on Saturday that the emails reveal how quickly the White House moved to cut off military aid to Ukraine hours after President Trump’s July phone call with the new president of Ukraine. Johnson responded to the release of those emails by bringing up allegations of corruption in Ukraine that Republicans have focused on throughout the impeachment process.”Senator, I know you’ve said this before,” Raddatz interjected. “But these are new emails.””Those are legitimate concerns (about corruption) and the new emails don’t shed any new light on that,” Johnson said. Copyright © 2019, ABC Radio. All rights reserved.