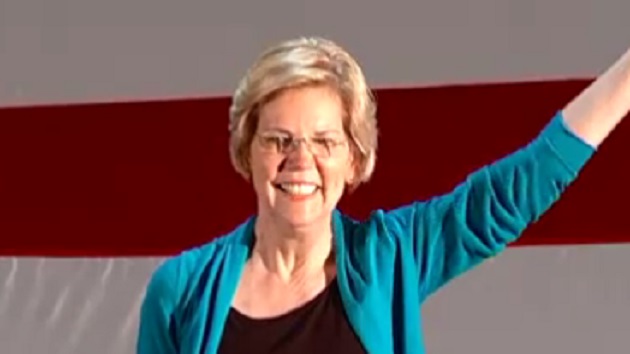 ABC News(DES MOINES, Iowa) — Sen. Elizabeth Warren’s presidential campaign released a new ad on Monday that zeroed in on the line of attack she used against South Bend, Indiana, Mayor Pete Buttigieg on the debate stage last week.“I’m not afraid to stand up to the powerful interests,” Warren says in the ad, which will air in Iowa and released exclusively to ABC News.Warren has pledged not to hold closed-door fundraisers or take money from super PACs. Sen. Bernie Sanders of Vermont has joined Warren by saying no closed-door fundraisers with high-dollar donors, raising money instead from grassroots donations.“I’m not doing big-dollar fundraisers, I’m not selling ambassadorships to donors, I’m not cozying up to super PACs. And my first priority as president will be to pass the biggest package of anti-corruption reform since Watergate,” Warren says in the ad.

Warren has so far spent about $2.3 million on TV and radio ads in Iowa, according to the ad tracking firm CMAG. Buttigieg’s current spending total in Iowa, by comparison, is about $6.5 million. Candidate Tom Steyer has spent the most in Iowa, totaling around $11 million so far.Warren’s ad comes on the heels of a fiery exchange at the sixth Democratic debate on Dec. 19, when Warren went after Buttigieg for holding a fundraiser in a wine cave in the hills of Napa Valley.“The mayor just recently had a fundraiser that was held in a wine cave full of crystals and served $900-a-bottle wine,” Warren said at the debate. “Think about who comes to that. He had promised that every fundraiser he would do would be open door, but this one was closed door. We made the decision many years ago that rich people in smoke-filled rooms would not pick the next president of the United States.”The event was one of the first fundraisers that Buttigieg opened up to a member of the press after repeated calls from Warren in the weeks leading up to the debate.Warren’s and Buttigieg’s feud has intensified after Buttigieg began to edge Warren out at the top of the polls in Iowa, posing a challenge to Warren’s chances in the state.At the debate, Buttigieg brought up Warren’s own past fundraising practices during her senate campaigns in 2012 and 2018, when she did hold closed-door fundraisers with high-dollar donors. As is common practice by senators or members of Congress who run for president, Warren transferred part of the money from her Senate war chest to her presidential race, so a portion of the $10.4 million transferred to her 2020 campaign may have included money that came from fundraisers.“This is the problem with issuing purity tests you yourself cannot pass,” Buttigieg said on the debate stage.The candidates will meet again in January for the last debate before Iowa’s caucuses. The debate will be held on Jan. 14 in Iowa’s capital city, Des Moines.