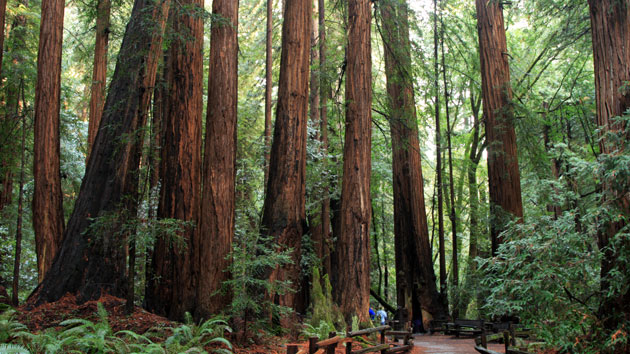 iStock(SAN FRANCISCO) — A 28-year-old tourist from Minnesota was killed on Christmas Eve when a giant redwood tree toppled over on him while he was hiking in Northern California’s Muir Woods National Monument Park, authorities said on Thursday.Subhradeep Dutta of Edina, Minnesota, was hiking on the marked Hillside trail with other people when the 200-foot tall tree, measuring 4-foot in diameter, came crashing down, according to the Marin County Corner’s Office.The freak incident occurred about 4:30 p.m. in the national park about 16 miles north of San Francisco, the coroner’s office said in a statement.”Upon the arrival of first responders to the scene, a male subject was discovered unconscious and lifeless beneath a large redwood tree, which had unexpectedly fallen to the ground,” the statement reads.Dutta was pronounced dead at the scene, officials said.A woman was also injured by falling debris and was taken to the hospital for treatment, officials said.Officials said the tree fell following a series of winter rainstorms over the past two weeks.In the winter of 2016 and 2017, Muir was closed after heavy rainstorms slammed the San Francisco Bay Area, causing up to 12 towering coast redwoods to topple, officials said.”This is a very rare, and isolated event that may have occurred due to wet ground from recent winter storms, around the roots of the tree,” Charles Strickfaden, a spokesman for the U.S. National Park Service, said in a statement. “The National Park Service extends its thoughts and prayers to all those involved.”Copyright © 2019, ABC Radio. All rights reserved.