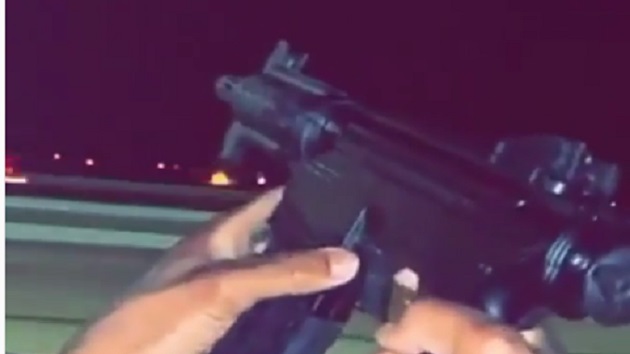 Instagram/@fitfamelpaso(EL PASO, Texas) — A viral video of a man shooting a semi-automatic weapon along a Texas highway has led to his arrest, police said.The silent video showed a man smiling in the backseat of a moving vehicle as he handled and then fired an AK-47 pistol-style weapon six or seven times out the window as cars drove by in the opposite lane.The video was posted to social media and then shared Saturday on Instagram by the popular El Paso gossip site “Fit Fam El Paso.””Absolutely disgusting footage surfaced last night of yet another person firing a weapon out of a moving vehicle on El Paso highways,” the post said. “Although this is not a video you’d like to see just days before Christmas, we’re posting it because it’s the reality of El Paso right now, and you MUST be cautious out there, because there are many people who aren’t.”The next day, the El Paso Police Department referenced the video on their Twitter page and called for the unidentified shooter to turn himself in.”If you are the person in the video, or person taking the video, the smart thing to do now: 1. Walk in to any police station unarmed and speak to investigators. 2. Make it a lesson learned and move forward from there,” El Paso Police said in the post.The following day, Jonathan Jay Oneal, 26, voluntarily turned himself in to authorities and was arrested on charges of discharging a firearm, police said.The shots were fired Friday night along the Patriot Highway near Spur 601 in eastern El Paso, authorities said. No injuries were reported in the incident.”We are grateful that no one was injured and appreciate the efforts of everyone not willing to tolerate this type of behavior in our city,” EL Paso Police posted on Twitter after Oneal had turned himself in. “Thank you for your willingness to step up to keep our community safe.” Copyright © 2019, ABC Radio. All rights reserved.