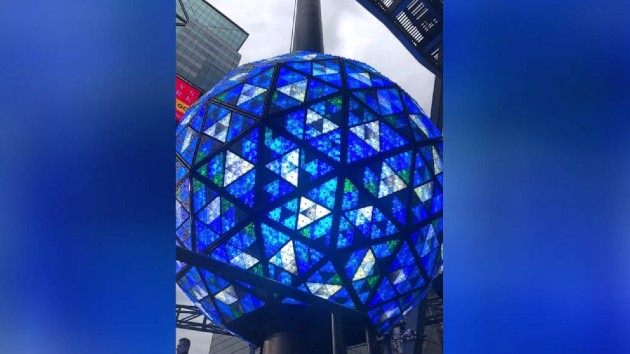 Morgan Korn/ABC News(NEW YORK) — Chances are you’ll be ringing in 2020 with a glass of bubbly in hand, watching the New Year’s Eve Ball descend from its flagpole atop One Times Square and crooning, “Should auld acquaintance be forgot …” Some traditions never change. The New Year’s Eve Ball, for example, has been a fixture in Times Square since 1907. Seven versions of the ball have ushered in a new year as revelers below (and around the world) celebrate what’s to come. The ball has been lowered in Times Square every year with the exceptions of 1942 and 1943 for the wartime “dimout” of lights.The very first ball weighed 700 pounds, was constructed from iron and wood and illuminated with 100 light bulbs. It has since transformed into a geodesic sphere that’s 12 feet in diameter and weighs 11,875 pounds. At 11:59 p.m. ET on Dec. 31, the ball will slowly make the awaited journey down from its 140-foot-high perch, glistening with 2,688 Waterford crystal triangles. Each triangle is bolted to 672 LED (light emitting diodes) modules, which are attached to the ball’s aluminum frame. More than 16 million colors and billions of patterns are possible from the 32,256 LEDs. You’d have to squint really hard to see the 192 new triangles adorned with the 2020 Gift of Goodwill pattern of three pineapples, the international symbol for hospitality.Waterford Crystal has supplied the ball’s triangles since 1999 and is responsible for choosing the yearly themes. The crystal triangles are shipped to New York City four weeks before the big night and are stored in a vault in an undisclosed location not too far from One Times Square, according to Tom Brennan, Waterford’s master artisan.A select group of 100 Waterford employees — from engineers, glassblowers and technicians — are involved in the design and manufacture of the New Year’s Eve Ball, a process that begins in mid-January. Every Dec. 27, Waterford’s technicians carefully bolt the triangles into place and the testing process continues until 6 p.m. on Dec. 31. Waterford takes no chances — the company has backups in place if any last-minute mishaps occur.”I am crossing my fingers, touching wood as we speak … we are so confident this will be absolutely perfect for everybody to watch around the world,” Brennan told ABC News. He added, “The machinery, technology, hydraulics behind all this is remarkable.”Lola Cristall, who lives in Paris, got a sneak peek of the ball last Friday, her first time seeing the ball up close. “It is absolutely exquisite,” she gushed to ABC News. “The ball is much more grand in real life.” Matthew Libassi of Long Island said he watches the ball drop on TV each year. But “to touch it, take a photo with it … it’s a little surreal,” he told ABC News. “This is a once in a lifetime opportunity.” Copyright © 2019, ABC Audio. All rights reserved.