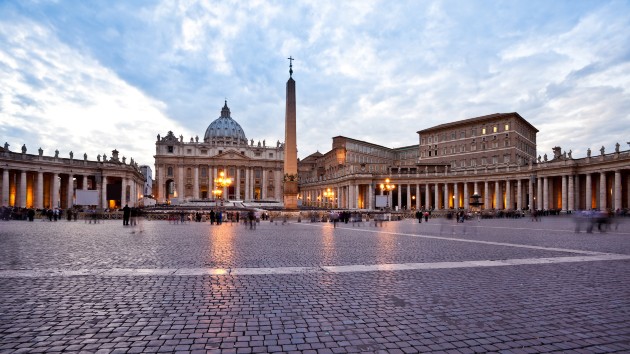 zodebala/iStock(ROME) — Pope Francis apologized for slapping the hand of a woman who grabbed him and pulled him off balance at New Year’s Eve event in St. Peter’s Square. Video from Vatican TV shows Francis, accompanied by what appear to be security officers, greeting pilgrims across crowd barriers after he had inspected a nativity scene on New Year’s Eve.As Francis greets a nearby child, the woman can be seen making the sign of the cross. As the pope turns to move on she grabs his hand, briefly pulling him off balance as she forcibly pulls him toward her. It is unclear from the video what the woman said to Francis as she locked hands with him.When the woman doesn’t let go, Francis can be seen slapping her hand to break her grip. Once free, he turns and walks away with a frown on his face. In his New Year’s Day Angelus address, Francis said: “Love makes us patient. At times we lose our patience – me too. And I am sorry for the bad example I gave yesterday.”The incident is not Pope Francis’ first security scare. During a visit to Morocco in March 2019, a man charged towards his motorcade, before being tackled by security officials.The scene of the incident also recalled a previous, far more serious, papal security threat, when Pope John Paul II was shot in an attempted assassination in 1981 in the St. Peter’s square. Francis also presided over a New Year’s Eve service in St. Peter’s Basilica, where he called on the Catholic Church to “connect with others and listen to what they are living and their cry for help.”

Clare Crawley breaks her silence on split from Dale Moss: “This was not what I expected or hoped for”
Priyanka Chopra Jonas says the racism she suffered in high school forced her to leave America
Psst: Shonda Rhimes’ ‘Bridgerton’ renewed for second season at Netflix
Chrissy Teigen says sobriety is “a different world for me”
Alibaba stock spikes after Jack Ma resurfaces
900,000 Americans filed for unemployment insurance last week