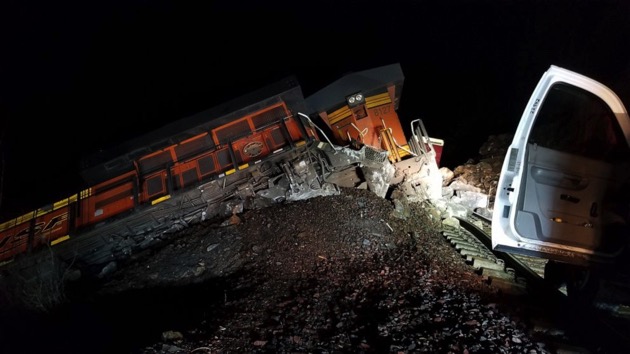 Idaho State Police(BONNER’S FERRY, Idaho) — A cargo train derailed, sending the engine into an Idaho river late Wednesday night, leaving the driver and crew to be rescued by boat and authorities working to contain diesel fuel leaking into the river.The Burlington Northern Railroad train derailed into the Kootenai River, near the town of Bonner’s Ferry. Local authorities were alerted around 9 p.m. and warned that the crew may be trapped inside.Local sheriffs, search and rescue, ambulance and fire teams deployed to the scene to find that the engine was only accessible from the water, ABC Fox Montana reported.

Boundary County Emergency Management, BNSF, ISP, Boundary CSO/EMS/Fire are on scene of a train derailment in the area of Crossport just east of Bonners Ferry. Be aware that local roads in the area may be congested or intermittently closed as crews work to remove the engines. pic.twitter.com/Z1iwdGVByk

Boundary County Sheriff’s Marine rescue crews were able to reach the engine by boat and safely retrieve the train operators, who were not injured.Night-vision video shot from helicopters showed the engine entirely in the river and partially submerged, with part of the second car in the water. The remaining 113 cars, seven of which contained hazardous materials, stayed upright, ABC affiliate KXLY reported.”Once we got onto the location we had good visibility above the wreckage except for the river, which was socked in with fog on one-half of the river, which was the side the train was on,” Rob Cherot, one of the rescue pilots called to the scene, told KXLY.Reports indicated that the derailment was the result of a rock slide.Crews continue to work to remove the locomotive from the river and to stem the contamination from diesel fuel leaking from the wreck. Firefighters and railway workers have deployed containment booms at multiple spots on the river to minimize any negative environmental impacts, ABC Fox Montana reported.On Thursday, local officials issued a state of emergency in order to restrict boat access to the area while the cleanup continues.Writing on Facebook, the North Bench Fire District said: “All the First Responders and agencies involved in the incident did an amazing job, and the crews faced a difficult and dangerous situation and were able to safely and effectively prevent loss of life and reduce further environmental impacts.”Copyright © 2020, ABC Audio. All rights reserved.