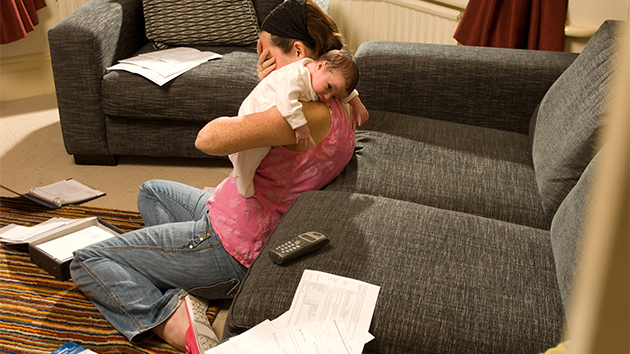 Sturti/iStock(NEW YORK) — High out-of-pocket costs for maternity and childbirth care for women with employer health insurance appears to be a disheartening new normal, rising sharply between 2008 and 2015 — from $3,069 to $4,569, according to a study published Monday in the journal Health Affairs.Of the more than 650,000 women in the study, all of whom had been hospitalized during childbirth, fully 98% of the sample — nearly every single woman — reported out-of-pocket costs (up from 94% in 2008), driven in part by increasing use of high-deductible insurance plans. Those plans also tend to have higher out-of-pocket maximum costs.In addition to more expensive bills, women with employer health insurance are also paying a higher proportion of childbirth and maternity care costs than they did in the past.Women who had vaginal births paid about 13% of expenses in 2008. By 2015, that percentage of cost sharing had risen to 21%. For women who had cesarean sections, which are more expensive than vaginal births, the proportion of costs women absorbed rose from 10% to 15% over the same time period, according to the study.While preventative care, like birth control, pap smears and mammograms are covered under a provision in the Affordable Care Act, maternity care is not.”These are no small co-pays,” said Dr. Michelle Moniz, lead author of the study and an OB-GYN at Michigan Medicine’s Von Voigtlander Women’s Hospital.”These are staggering amounts of money.”The researchers used standardized costs, not actual charges or payments, in their analysis. And since the study only analyzed women with employer health insurance, which includes 60% of adult women younger than 65, the results can’t be generalized to other groups.Moniz said that the rising out-of-pocket costs were driven by the proliferation of high-deductible plans as opposed to the standardized cost of maternity care, which remained stable.”That mirrors what we’ve seen in other areas of health care spending. We’re starting to see more folks with high-deductible health plans, and that’s where we’re seeing a lot of the rise in costs for many services, including maternity care,” she said.An added wrinkle is that nearly half of pregnancies in the United States are unplanned, according to the Guttmacher Institute. If a woman isn’t planning to become pregnant, she may pick a high-deductible plan because she assumes she won’t use much health care that year.Unplanned pregnancy makes “it very difficult for people to prepare and save for this kind of expense,” Moniz said. As it stands, 1 in 3 Americans say they wouldn’t be able to cover an unexpected $400 medical bill without borrowing money or selling their belongings, much less an unexpected $4,500 medical bill.Americans who are saddled with the burden of high deductibles are sometimes forced to make hard trade-offs, research by the Commonwealth Fund has found, including skipping medical tests or forgoing treatment.It’s a reality that Moniz has witnessed in her own practice. “I know that financial costs sometimes lead my patients to delay or defer recommended services,” she said.In the case of maternity care, deferred or delayed treatment can increase the risk of poor birth outcomes, at a time when the United States has the highest maternal mortality rate in the developed world. More than half of the 700 deaths that occur each year, which disproportionately affect women of color, are preventable, according to the Centers for Disease Control and Prevention.”This is care that we want everybody to have access to, not just those who can afford it,” Moniz said.High hospital costs, murky billing practices”That time in the hospital, is above all, super-expensive,” said Carol Sakala, director of childbirth connection programs for the nonprofit National Partnership for Women and Families, which has also done research into childbirth costs.”Four out of five dollars paid on behalf of the woman and baby go into that hospital care,” she added.She advises new parents to keep an eye out for factors that can trigger surprise medical bills, such as out-of-network specialists or anesthesiologists, who may contract with an in-network hospital. She also notes that many medical bills contain errors, and families commonly get billed for services they’re sure they didn’t receive.”A lot of stuff is negotiable,” she said. But for new mothers, arguing over potential medical bills is the last thing they’re up for during labor. “At that point, they just want to relax and not focus on payment or arguing,” Sakala said. “You want to be in a setting where you’re getting good support, not negotiating.”In the end, a lot of those rising out-of-pocket costs end up being out of parents’ control.”It’s hard to know what the costs will be, even for an uncomplicated vaginal birth,” Sakala said. “It’s a perverse system.”

Kamala Harris set to resign from US Senate so she can preside over it
Woman, 70, filmed allegedly poisoning husband’s coffee with roach killer multiple times
Nearly a dozen ex-military members among those arrested in connection with Capitol riot
Nestle delivers sweet taste of nostalgia with new Cinnamon Toast Crunch milk
Shawn Johnson pregnant with baby No. 2 with husband Andrew East
POLL: With partial blame for the Capitol attack, majority favors barring Trump from office