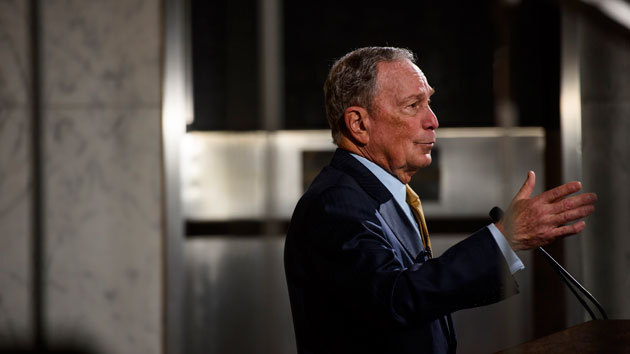 Melissa Sue Gerrits/Getty Images(NEW YORK ) — Billionaire Democratic presidential candidate Mike Bloomberg and President Donald Trump’s campaigns have purchased dueling multi-million dollar ads to air in high profile slots during the Super Bowl the campaigns, according to the campaigns.Bloomberg’s campaign bought a 60-second ad that will air nationally during the game. While the campaign would not specify the price tag for that air time, they say they are paying “market rate,” which Fox executives have described as “north of $5 million” for 30-second slots. That could put potentially Bloomberg’s spending at upwards of $10 million.Senior aides tell ABC that the point is to “take the fight to Trump” – and moreover, they say, to get under his skin. The comments were first made to the New York Times.When Team Bloomberg heard that the Trump campaign was considering a 30-second ad during the game– a move which was reported by The Business Journal in November — they specifically made the choice to ‘opt for more impact and more time’ – doubling Trump’s rumored potential air time with their own buy.It’s a direct response to Trump, and meant to directly target him, rather than a get-to-know-the-candidate commercial.The Trump has plans of its own to run a $10 million ad during the Super Bowl along with boosting a string of other advertising efforts and voter outreach, a senior campaign official confirmed to ABC News on Tuesday.The Trump campaign confirmed to ABC News on Tuesday that they purchased 60 seconds of Super Bowl airtime recently which they plan to run either one 60 second ad or two 30 second ads early in the game. The timing of the Super Bowl is aimed at helping the president’s re-election team have maximum impact on the Iowa caucus which falls the day after the big game this year.Days before the game, the campaign says it will preview the ad with a text message to supporters as a list building effort.While the timing of the Super Bowl ad news, first reported by Politico, appears to suggest a coordinated response to Bloomberg’s campaign, the Trump team tells ABC News they began discussing the ad buy with Fox back in the fall and reserved time in December before actually paying for it last week.Last year the Trump campaign spent millions on an ad that ran during the World Series, which argued that the president is “no Mr. Nice Guy, but sometimes it takes a Donald Trump to change Washington.”The Super Bowl ad buy marks the first major flex by the campaign of its massive war chest in 2020. Along with the Republican National Committee, the president’s reelection effort amassed raising over $460 million in 2019, entering the election year with nearly $200 million on hand.And the campaign is also investing millions into voter outreach for key demographics like women, evangelicals, Latinos, and African Americans, the campaign confirmed to ABC News. They also plans to increase TV, radio, and digital spending this month.“The president’s decision to stay aggressive and keep the campaign open after his first election gave us a huge head start on his reelection,” Trump campaign manager Brad Parscale said in a statement. “Now 300 days out we are throttling up. The president has built an awesome, high-performance, omni-channel machine and it’s time to give it some gas.”Meanwhile, Bloomberg’s strategy is to bypass the four early states altogether – honing in on the delegate-rich Super Tuesday states; and his campaign hopes a full minute on air during the Super Bowl will help him net the attention of millions of viewers just a few weeks away from that crucial period .Bloomberg has spent unprecedented amounts on advertisements – already well-surpassing the $100 million mark – flooding the airwaves even as he’s absent from debate stages.His ground game is also swelling: now with 500 organizers and staff in more than 30 states, including all 14 of the Super Tuesday states in addition to 300 staffers at his New York city headquarter.  Copyright © 2020, ABC Audio. All rights reserved.