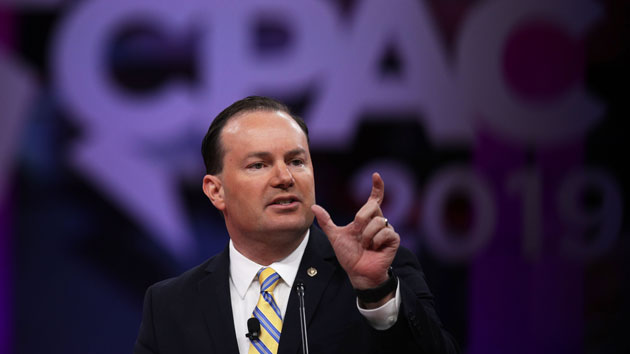 Alex Wong/Getty Images(WASHINGTON) — President Donald Trump’s close, conservative ally Sen. Mike Lee, R-Utah, was livid following a classified briefing that members of Congress received Wednesday by top officials on the decision to order an airstrike that killed Iranian Gen. Qassem Soleimani, which brought tensions with Iran to a boiling point.While most Republicans came out of the briefing with praise for the administration’s handling of last week’s drone strike that killed Soleimani, Lee said he was left utterly shocked and insulted that administration officials allegedly told senators they shouldn’t debate and discuss military action against Iran.”For them to tell us … for us to debate and discuss these things on the Senate floor would somehow weaken the American cause and embolden Iran in any other actions, I find very insulting,” Lee said, who did not specify to reporters on Capitol Hill which briefer made the assertion.”It is not acceptable for officials within the executive branch of government — I don’t care if they’re with the CIA, the Department of Defense or otherwise — to come in and tell us that we can’t debate and discuss the appropriateness of military intervention against Iran,” Lee added.Lee was joined by GOP Sen. Rand Paul as he addressed reporters. Paul said that while he is a friend and supporter of Trump, he thinks “we need to have a debate of the separation of powers.”Lee and Paul both noted that they now want to support a War Powers Resolution that intends to check the president’s power to commit the U.S. to an armed conflict without the consent of Congress. The House plans to vote on the resolution Thursday.”The briefing lasted only 75 minutes … (it was) probably the worst briefing I’ve seen — at least on a military issue — in the nine years I’ve served in the U.S. Senate,” Lee said. “Drive-by notification or after-the-fact lame briefings like the one we just received aren’t adequate.””I understand these are busy people, they’ve got a lot of demands on their time … they had to leave after 75 minutes while they’re in the process of telling us that we need to be good little boys and girls and run along and not debate this in public. I find that absolutely insane,” Lee added. “It’s un-American, it’s unconstitutional, and it’s wrong.”Lee also said the briefers were asked “repeatedly” what, if anything, would trigger the need for the administration to come back to Congress for a declaration of a war, or an Authorization for Use of Military Force (AUMF).”The briefers said something along the lines of, ‘I’m sure we can think of something.’ But they struggled to identify anything,” Lee said.The Utah senator said he intends to speak to the president about what he was told.His description of the briefing was vastly different from what other Republicans described in their remarks to reporters.”I just sat through one of the best briefings I’ve had since I’ve been here in the United States Congress,” Senate Foreign Relations Committee Chairman James Risch said. “After listening to the information that the president had, the CIA had … it would have been negligent, it would have been reckless, and it would have been an intentional disregard to the safety of Americans not to ask and not to take out Soleimani.”Risch said the information provided by the briefers was “crystal clear” and he accused Democrats of hating the president so much, they were willing to risk American lives.When asked about the intelligence that the U.S. had on Soleimani, Sen. Roy Blunt, R-Mo., told reporters that his activities were likely to come to a “significant head” soon. Blunt said Soleimani changed his patterns last spring and that his activities would have resulted in the loss of American life.Sen. Tom Cotton, R-Ark., called the missiles from Iran last night a “feckless and anemic attack.” He praised U.S. technology and then added, “Iran didn’t just take an off-ramp; they took a U-turn.”Democrats, for their part, blasted the briefing.”There were so many important questions that they did not answer. We did not see a satisfying plan for the future. We had 97 senators there. Fifteen got to ask questions. As the questions began to get tough, they walked out. I’ve asked for a commitment that they all come back within a week. We’ve not yet gotten that commitment,” Senate Minority Leader Chuck Schumer said.”I would say that the briefing was incredibly thin on facts, and to the extent that they provided facts in my judgement, they did not support any claim of an imminent threat that would justify the actions they’ve taken with respect to eliminating Soleimani,” Sen. Chris Van Hollen, D-Md., said.Sen. Chris Murphy of Connecticut said he thought it was apparent to him that the decision to strike Soleimani was a “choice” and not because of an imminent threat.”It appears to me a strike of choice by this administration, one that likely would have required Congressional authorization beforehand,” Murphy said. Copyright © 2020, ABC Audio. All rights reserved.