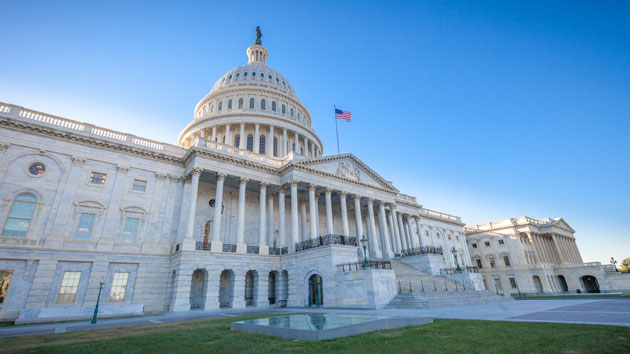 iStock(WASHINGTON) — The House of Representatives will vote on a War Powers Resolution on Thursday to reassert Congress’s authority to declare war by mandating that absent additional congressional action, the Trump administration’s military hostilities against Iran cease within 30 days, Speaker Nancy Pelosi announced Wednesday afternoon.”Members of Congress have serious, urgent concerns about the Administration’s decision to engage in hostilities against Iran and about its lack of strategy moving forward,” Pelosi, D-Calif., said in a statement following an all-member classified briefing by senior administration officials. “Our concerns were not addressed by the President’s insufficient War Powers Act notification and by the Administration’s briefing today.”The measure is expected to be privileged, forcing the GOP-led Senate to take up the bill as well, although the resolution is subject to the president’s veto power and highly unlikely to have more of an effect than to serve as a policy statement for Democrats.Pelosi said that the House could also soon consider additional related measures, including Rep. Barbara Lee’s resolution to repeal the Iraq Authorization for Use of Military Force (AUMF) resolution from 2002, as well as recent legislation proposed by Sen. Bernie Sanders, I-Vt., and Rep. Ro Khanna, D-Calif., to prohibit funding for military action against Iran not authorized by Congress.”The Administration must work with the Congress to advance an immediate, effective de-escalatory strategy that prevents further violence,” Pelosi said in her statement. “America and the world cannot afford war.”Rep. Elissa Slotkin, D-Mich., who once worked as a Middle East analyst for the CIA, is the primary author of the resolution, formally known as H. Con. Res. 83.”The killing of Iranian General Qassem Soleimani, as well as Iran’s ballistic missile attack on Iraqi bases, risks significant escalation in hostilities between the United States and Iran,” the bill states in part. “Congress has not authorized the President to use military force against Iran.”By instituting a 30-day limit on hostilities without congressional approval, Slotkin said that her resolution would require Trump to seek an AUMF before taking the country into a protracted war with Iran.”This resolution is intended to make clear that, if the president wants to take us to war, he must get authorization from Congress,” Slotkin said. “This is simply what our Constitution requires.”While the administration has relied on a number of authorities to justify last week’s missile strike to kill Soleimani, including Article II of the U.S. Constitution and the AUMF, Wisconsin Rep. Mark Pocan, the co-chair of the Congressional Progressive Caucus, told reporters that officials failed to demonstrate that Soleimani presented an imminent threat.”The real problem is the president has broken his trust with the American people and with Congress on so many issues, it’s very difficult to trust him,” Pocan, D-Wis., said Wednesday during news conference in the Capitol. “Just days before the assassination, he said all was well with Iran. And then days later, we have the attack that happens. We have had him over and over, do actions that have put us at greater risk.”Rep. Pramila Jayapal, D-Wash., insisted that a war powers debate is “urgent” and the White House’s showdown with Tehran demands “immediate action” while Rep. Ilhan Omar, D-Minn., asserted that Democrats are “dealing with an irrational administration” so Congress must reassert its power to declare war.”We owe it to the American people to prevent war, and not prepare for more war. This is what is needed to keep our country safe,” Omar said. “The occupant of the White House has not done a single thing to stabilize the region. He has done everything to create more attention.”She added, “We are no more safer today than we were yesterday.”Copyright © 2020, ABC Audio. All rights reserved.