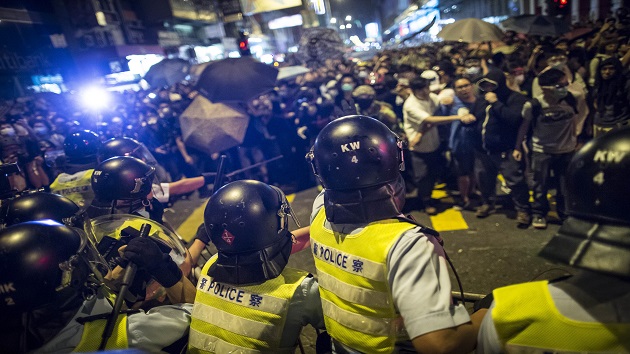 iStock/r-monochrome(HONG KONG) — Unrest in Hong Kong is taking a major toll on many residents’ mental health, according to a new study.In Hong Kong, where mass protests erupted for nearly six months last year, 1 in 3 surveyed adults reported symptoms of post-traumatic stress disorder, according to a 10-year observation study, which was published Thursday in the Lancet.Those numbers are comparable to the prevalence of mental health problem observed after large-scale disasters, armed conflict or terrorist attacks, the researchers said.The study utilized survey data from more than 18,000 Hong Kong residents between 2009 and 2019. In 2014, after other protests, 2% of the population reported symptoms of depression compared with 11% in 2019.Those showing signs of PTSD increased from 2% following the protests in 2014 to roughly 30% in 2019.Using social media related to news and politics for two or more hours per day was linked to an even higher risk of probable depression and PTSD, the study found, while family support seemed to protect against those mental health outcomes.Fewer than half of those affected said they would seek professional mental health care.The protests, which began last June, started in response to a bill that would have allowed Hong Kong to extradite criminal suspects to China and morphed into a pro-Democracy movement against Beijing’s rule over the city.”With social unrest rising around the world, including in major cities such as Barcelona, Delhi, Paris and Santiago in 2019, the issue of how social unrest impacts population mental health is of great public-health importance,” Dr. Michael Ni, coauthor of the study and clinical assistant professor at the University of Hong Kong, said in a statement.Copyright © 2020, ABC Audio. All rights reserved.

DHS to ramp up security assistance in Qatar for World Cup

Why it may be hard to isolate Russia and has it become a pariah state?