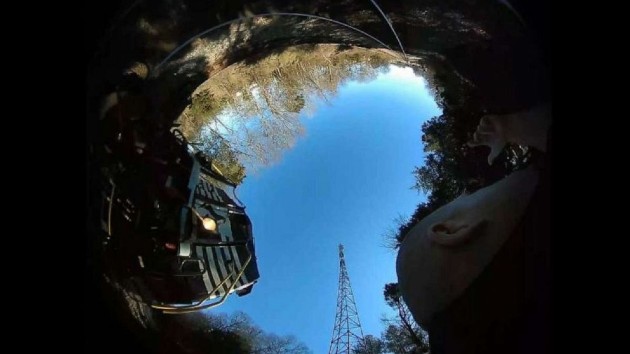 Polk County Police Department(CEDARTOWN, Ga.) — Video captured what could have easily been a Georgia police officer’s last moments as he was hit by a moving train. Polk County Police Department officer Andy Anderson miraculously survived being struck by a train last week in a terrifying close call that was documented by his 3D body-worn camera, authorities said.Anderson was chasing a suspected robber who fled into a wooded area surrounding the train tracks in Polk County, located about an hour west of Atlanta. Authorities said he was so focused on catching the suspect that he didn’t step far enough away from the tracks — or see the oncoming train.The Polk County Police Department shared video captured by the officer’s body cam, documenting the moment of impact. The train, blowing its horn, appeared to be just a few feet away from Anderson as he continued to chase down the suspect. Seconds later, the video showed the officer being knocked into the woods from the train’s force. He landed in bushes beside the tracks and could be heard moaning for help for several minutes.Thankfully, his injuries were not critical and he was released from the hospital on Sunday. Polk County Police Department Chief Kenny Dodd said Anderson suffered numerous broken bones, but he was in good spirits overall.The department also shared an image of the officer giving a thumbs up from his hospital bed before his release. The burglary suspect, identified by local news outlets as 18-year-old Jayden Moats, was still on the run as of Sunday evening. Copyright © 2020, ABC Audio. All rights reserved.