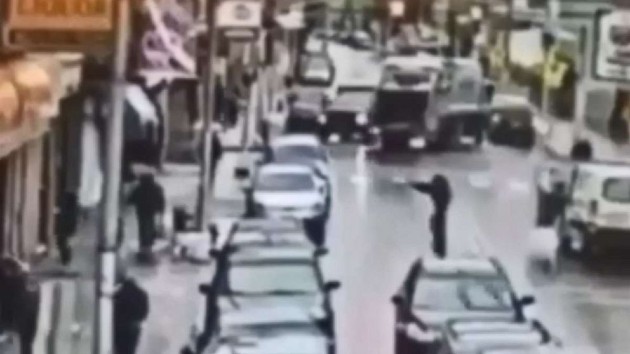 Obtained by ABC News(NEW YORK) — Hate for the Jewish community and law enforcement were the twin motives behind a deadly December attack at a New Jersey kosher supermarket by a pair of suspects who were armed to the teeth and possessed a homemade bomb powerful enough to maim people five football fields away, authorities said on Monday. Updating the public on its investigation, federal prosecutors and FBI officials said suspects David Anderson and Francine Graham, who were both killed in a gun battle with police, may have been forced to alter their initial attack plans when Detective Joseph Seals recognized their van was wanted in connection with an unsolved homicide in nearby Bayonne, New Jersey, and confronted them, officials said. Seals, a veteran of the Jersey City Police Department, likely did not know the extent of the danger he was in when he approached the suspects’ U-Haul van in Bay View Cemetery in Jersey City on Dec. 10 and was gunned down, officials said.By the time Seals was killed, Anderson and Graham had already allegedly murdered a livery driver in Bayonne and shot up a car driven by a Jewish man near Newark Airport, authorities said. Evidence found in the U-Haul van the suspects had stolen suggests they initially planned to target a Jewish community center in Bayonne until they ran into Seals, who just happened to be in the cemetery meeting an informant, Craig Carpenito, U.S. Attorney for the District of New Jersey, said at a news conference. “We believe [Seals] threw off a broader plan,” Carpenito said. Carpenito said Seals, a 40-year-old married father of five, “probably saved dozens if not more lives.”After allegedly killing Seals, Anderson, 47, and Graham, 50, drove from the cemetery to the Jersey City Kosher Supermarket, about a mile away, and stormed the business with guns blazing, killing three civilians inside. Security video released earlier by investigators showed Anderson parking the van in front of the supermarket, exiting the vehicle and immediately opening fire with an AR-15-style rifle as he entered the store followed by Graham who was wielding a shotgun. A 9mm handgun used in the slaying of Seals was found on the suspects after they were killed in the market during an hours-long gunfight with police, Carpenito said.Also discovered in the van was a homemade pipe bomb powerful enough to send shrapnel flying over 500 yards, or the length of five football fields, and enough bomb-making material to build another explosive just as strong, authorities said. Prior to killing Seals and attacking the kosher market, Anderson and Graham had already been on a crime spree.The two first conducted target practice at a shooting range in Austintown, Ohio, on Dec. 1, according to video investigators reviewed, officials said. Two days later on Dec. 3, the pair fired two shots into a vehicle near Newark International Airport. The targeted car was driven by a man “visibly of the Jewish faith,” who escaped injury, authorities said. The victim of the car shooting did not report the gunfire right away, and only came forward after the Jersey City shooting, officials said. Anderson and Graham then targeted livery driver Michael Rumberger, who was bludgeoned and fatally shot in a Lincoln Town car in Bayonne on Dec. 7, officials said. Investigators have yet to learn why Rumberger was killed. In the days after Rumberger’s death, the suspects Googled “the meaning of the surname Rumberger,” officials said.”But there is nothing we can see that tied Anderson and Graham directly to Michael Rumberger prior to his murder, and we cannot stand here and say today definitively that Michael Rumberger was targeted,” Carpenito said. “We may never learn the connection between the murder of Mr. Rumberger and the individuals that were killed on Dec. 10, 2019, because the people that we definitely know were involved in this event are deceased.”Rumberger was killed with the same .22-caliber handgun used to shoot the vehicle near Newark Airport, Carpenito said. Rumberger’s blood was found on a Bible in the suspects’ U-Haul, he said.The day Seals was killed, Anderson and Graham drove past the kosher supermarket on Martin Luther King Jr. Boulevard twice — at 9:45 a.m. and 11:03 a.m. — leading investigators to believe they cased the supermarket they eventually attacked.While there is a yeshiva next to the market, investigators have yet to uncover any evidence that the suspects planned to attack the Jewish school as well, officials said. Authorities also confirmed on Monday that as shots were being fired in the supermarket, worker Douglas Miguel Rodriguez, 49, was killed as he heroically held the door open for another person to escape.The suspects killed their three victims — including Mindel Ferencz, 31, who owned the grocery with her husband, and Moshe Deutsch, 24, a rabbinical student from Brooklyn — in the supermarket immediately upon entering, officials said.From the get-go, law enforcement has investigated the killings as an act of domestic terrorism. Gregory Ehrie, the special agent in charge of the FBI’s Newark field office, said evidence collected so far suggests the motive for the rampage was hatred of the Jewish faith and law enforcement. “The subjects held biases against the Jewish community and against law enforcement,” Ehrie said on Monday. “And something cues these people off to commit violence,” Ehrie said. Investigators do not believe there are any co-conspirators. “We may never truly know all of the facts, all of the events, every detail of the intent behind the incidents that occurred,” Carpenito said. Copyright © 2020, ABC Audio. All rights reserved.