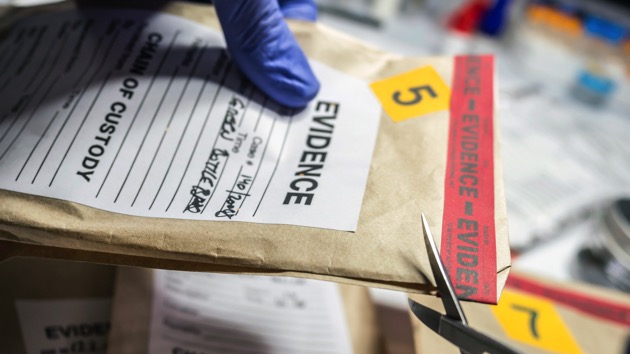 digicomphoto/iStock(DUPAGE COUNTY, Ill.) — A teenage girl’s murder from 1976 has now been solved thanks to DNA and genetic genealogy and investigators believe her murderer was a serial killer.On the night of Jan. 12, 1976, 16-year-old Pamela Maurer left a friend’s house in Illinois and walked to get a soft drink. She was never heard from again, DuPage County State’s Attorney Robert Berlin said.The next morning, the teenager was found raped and strangled to death on the side of a road in Lisle, Illinois, Berlin said.”For 44 years her murder remained a mystery,” Berlin said at a news conference on Monday.The first turn in the case came in 2001 when “biological evidence” was collected from Maurer’s body, Berlin said. A DNA profile was recovered from her suspected killer, and that was entered into the law enforcement database CODIS — but there were no hits, he said.The big break in the case was then in 2019, when investigators turned to the novel technique of genetic genealogy.Genetic genealogy compares unknown DNA evidence from a crime scene to public genealogy databases, which are populated by the DNA of family members who voluntarily upload their DNA.Genetic genealogy has been called a “game-changer” in cracking cold cases. Since the arrest of the suspected “Golden State Killer” in April 2018, about 100 suspects have been identified through the technology, according to Parabon NanoLabs Chief Genetic Genealogist CeCe Moore, who worked on the Maurer case.Investigators traced Maurer’s unknown killer’s family tree and identified Bruce Lindahl as a possible suspect, Berlin said.Lindahl died in 1981 at the age of 29, when he apparently accidentally slashed himself while stabbing an 18-year-old man to death, Berlin said.In November 2019, Lindahl’s body was exhumed and his DNA was found to be a match to the suspect DNA on Maurer’s body, Berlin said.Shortly before the holidays, detectives flew to visit Maurer’s family to tell her father and brother the identity of her suspected killer, Berlin said.”We finally put a name and face to this monster,” Lisle Police Det. Chris Loudon said Monday.But Maurer was not Lindahl’s first victim. Loudon said he suspects Lindahl was a serial killer.In 1980, Lindahl allegedly kidnapped and sexually assaulted Debra Colliander, forcing her into his car and taking her to his house in Aurora, Ill., where he allegedly threatened her with a gun and took nude photos of her, said Berlin. Colliander managed to escape by fleeing naked to a nearby home, said Berlin.Lindahl was charged with aggravated kidnapping, rape and deviant sexual assault. He was released on bail pending trial, said Berlin.Later that year, Lindahl allegedly told a friend that “a girl had pressed charges against him for rape, and that if the girl did not appear in court, he would get out of it,” Berlin said.On Oct. 7, 1980 — two weeks before the trial was set to start — Colliander disappeared, Berlin said.Later on, “the friend of Lindahl reported that Lindahl offered him $2,000, a handgun, whiskey and pills to get rid of the victim,” Berlin said.But the case against Lindahl had already been dismissed, he said.In 1982, Colliander’s body was found buried in a shallow grave in Oswego Township, Ill., and her death was ruled a homicide, Berlin said.By that time, Lindahl was already dead, he said.Numerous photos of young women were found in Lindahl’s home after his death, including photos of a woman last seen alive in 1979, Berlin said.Lindahl’s DNA is now being used to investigate unsolved cases, Berlin said in a statement Monday.Berlin said, “I urge anyone with any information about Bruce Lindahl, any crimes involving Bruce Lindahl or any possible victims of Bruce Lindahl to please contact us via our tip line at 630-407-8107 or Detective Chris Loudon of the Lisle Police Department at 630-271-4252.” Copyright © 2020, ABC Audio. All rights reserved.