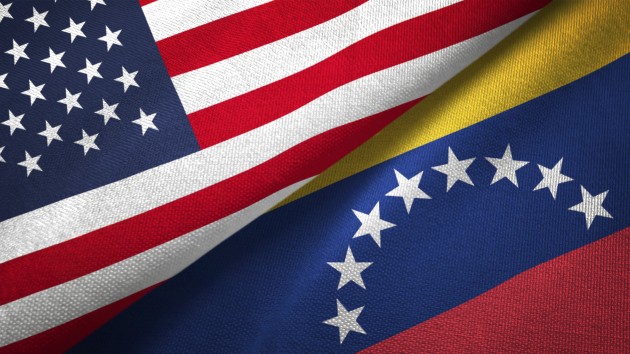 Oleksii Liskonih/iStock(WASHINGTON) — The Trump administration has sanctioned seven Venezuelan officials accused of colluding with President Nicolás Maduro to take over the country’s legislature, the last opposition-controlled institution in the country torn apart by political chaos and a humanitarian and economic crisis. Over one year after recognizing the president of the legislature, known as the National Assembly, as the country’s legitimate leader, the U.S. effort to oust Maduro has stalled. There are now growing fears that the strongman may stay in power, largely thanks to Russian support that U.S. officials said they underestimated last year.Venezuela has been gripped by a humanitarian crisis, with food and medical shortages and sky-high inflation after years of economic mismanagement and corruption under Maduro. Since last January, the country has also faced a political crisis, with the National Assembly recognizing its president, Juan Guaidó, as the country’s interim president and the U.S. and nearly 60 other countries following suit. Large crowds of Guaidó-led opposition protesters have taken to the streets sporadically since then, occasionally clashing with Maduro supporters and his security forces.The U.S. Treasury announced the sanctions Monday on seven current lawmakers who it accused of participating in Maduro’s “failed attempt to illegitimately seize control of the National Assembly” by blocking entry into the building and holding a vote for its president without a majority of lawmakers. The clashes unfolded on Jan. 5, when security forces loyal to Maduro locked down the building after some lawmakers had entered. Guaidó was seen trying to climb a fence to get inside, only to be torn down by security officials.Inside, lawmakers aligned with Maduro held a vote to install lawmaker Luis Parra as the legislature’s president, a move that defied Venezuelan law because there weren’t enough members present. Barred from the building, the majority of the National Assembly met elsewhere in the capital of Caracas and reelected Guaidó. Two days later, there were clashes again as Guaidó and most members returned to hold the vote again, this time successfully entering the National Assembly and reelecting him.Both Guaidó and Maduro have called on their supporters to demonstrate Tuesday after the chaos at the National Assembly, potentially setting up a day of clashes. Monday’s sanctions hit Parra and six other lawmakers for doing “the bidding of Maduro,” according to U.S. Treasury Secretary Steven Mnuchin, who warned that Parra, who used to back Guaidó, and the others could have the sanctions removed if they sided with Guaidó. The other legislators sanctioned were Jose Noriega, Franklyn Duarte, Jose Brito, Conrado Perez, Adolfo Superlano and Negal Morales.Guaidó’s envoy in Washington, Ambassador Carlos Vecchio, welcomed the announcement, blasting Parra and the six other officials as “traitors to democracy in Venezuela” and accusing them of being “bought by the dirty money of the corrupt Maduro dictatorship.” But there are concerns that even with wide-ranging U.S. sanctions and an alliance of democratic countries backing Guaidó, Maduro will not be forced from power. Venezuela’s military leaders and the majority of its rank and file still support Maduro, Hugo Chavez’s appointed successor — as does Moscow. Russia’s support at the United Nations has protected Maduro from greater international pressure while its state-owned oil companies have provided an economic lifeline for Maduro’s government.Russian companies are now handling more than 70% of Venezuela’s oil, including financing it and smuggling it out of the country for sale, according to U.S. special envoy for Venezuela Elliott Abrams. “We underestimated the importance of the Cuban and Russian support for the regime, which has proved, I think, to be the two most important pillars of support for the regime and without which it wouldn’t be there. It wouldn’t be in power,” Abrams told reporters Jan. 6.There is a push for the U.S. to do more to sever that connection, which could mean secondary sanctions on Russian companies working in Venezuela or facilitating its transfer of oil and gold out of the country. “We need to hold accountable Russia. … They are funding the suffering of the Venezuelan people,” Vecchio told ABC News Friday.Copyright © 2020, ABC Audio. All rights reserved.