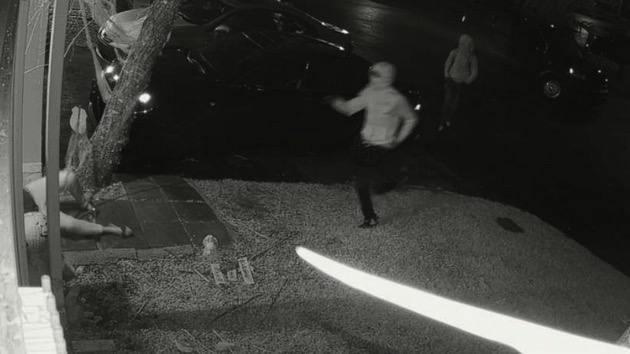 Surveillance video shows a home invasion and killing in Cutler Bay, Fla., Nov. 5, 2019. – (FBI)(CULTER BAY, Fla.) — A piece of evidence from a deadly home invasion in Culter Bay, Fla., has brought the FBI into the investigation.Minutes after 11 p.m. on Nov. of last year, Daniel J. Macko, his wife and an acquaintance, were confronted by several armed burglars inside a home in the vicinity of SW 222 Street and SW 99 Avenue.Police said when Macko’s wife returned to their home after running an errand she was rushed by people who exited a Dodge Ram van that was parked near the driveway, officials with the Miami Dade Police Department said.When Macko heard the commotion outside the house, he opened the door and the armed persons allegedly entered, officials said.The encounter was captured on surveillance video that the FBI released on Tuesday.The residence was ransacked by the alleged perpetrators as if they were “looking for something,” said Jim Marshall, a spokesman with the FBI.The acquaintance allegedly overheard someone in the group of invaders announce that “they had found ‘it,"” Marshall said.Before leaving Macko was shot several times and died at the scene. He was 31.

Macko’s wife and acquaintance were not injured, officials said.The FBI is involved in this case with the police department because of an “ongoing Hobbs Act Investigation,” according to a press release.In order for the Hobbs Act to become a part of an investigation, an element of the case must involve “organized crime, gang activity, or wide-ranging schemes,” according to the U.S. Department of Justice, additionally, ” … the Hobbs Act was enacted as a statute to combat racketeering in labor-management disputes, the statute is frequently used in connection with cases involving public corruption, commercial disputes, violent criminals and street gangs, and corruption directed at members of labor unions.”It’s unclear which piece of evidence triggered the Hobbs Act to get utilized. The investigation is ongoing.Anyone with information regarding this investigation is urged to call the FBI at (754) 703-2000. Copyright © 2020, ABC Audio. All rights reserved.