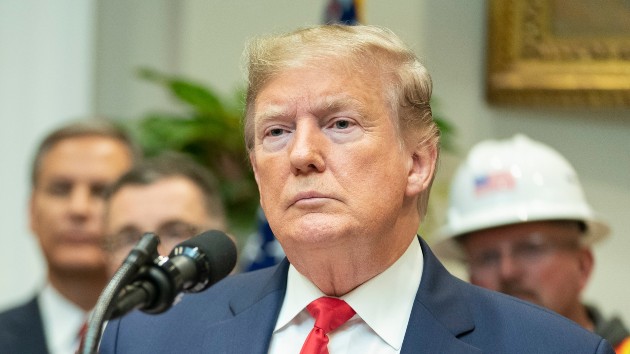 (WASHINGTON) — Lev Parnas, a Soviet-born associate of the president’s personal attorney, Rudy Giuliani, made dramatic claims Wednesday about President Donald Trump’s awareness of activities central to the House impeachment investigation and his Senate trial. “President Trump knew exactly what was going on” with his activities in Ukraine, Parnas told MSNBC’s The Rachel Maddow Show.Parnas said that included his efforts in spring 2019 to have Ambassador Marie Yovanovich removed from her post as the top U.S. diplomat in Kyiv. “[President Trump] was aware of all of my movements,” Parnas said. “I wouldn’t do anything without the help of Rudy Giuliani or the president.

“Pressed on the president’s insistence that he does not know him, Parnas said, “He lied.” Parnas pointed to his constant contacts with Ukrainian officials as evidence he was close to the president. “Why would President [Volodymyr] Zelenskiy’s inner circle or minister — or [former Ukraine] President [Petro] Poroshenko meet with me — Who am I?” Parnas asked. “They were told to meet with me. That’s the secret they were trying to keep. I was on the ground doing their work.”

White House press secretary Stephanie Grisham, in a statement Thursday morning, attacked Parnas’ credibility while not offering an explicit, direct denial of his claim that the president was aware of all of his movements. She dismissed Parnas’ claims by insisting the president did nothing wrong. “These allegations are being made by a man who is currently out on bail for federal crimes and is desperate to reduce his exposure to prison. The facts haven’t changed – the President did nothing wrong and this impeachment, which was manufactured and carried out by the Democrats has been a sham from the start,” Grisham said in the statement. Grisham then went on Fox and Friends later Thursday morning, again seeking to distance the president from Parnas. “The president has said he did not know him, and I’ve got to say, just to say ‘Rudy told me these things’ doesn’t mean that it has anything to do with the president and it certainly doesn’t mean that the president was directing him to do anything. We stand by exactly what we’ve been saying the president did nothing wrong,” Grisham said.

Giuliani has previously said he would testify in the Senate trial and that he’d love to try the case himself. When asked again about that Wednesday night, Giuliani texted ABC News: “I am bound by attorney client privilege so it’s not just my decision.” Parnas said he and the president were by no means friends, but that the president had to have known exactly who he was. “I was with Rudy four or five times a week,” Parnas said. Parnas’ appearance on the cable network landed on a historic day in Washington. On Wednesday afternoon, House Speaker Nancy Pelosi officially triggered the process to send two articles impeachment to the Senate, where senators will be sworn in on Thursday and House managers, acting as prosecutors, will read the articles aloud before make opening arguments next week. Shortly after delivering the impeachment articles, the House Intelligence Committee published new records gathered from Parnas as part of a subpoena request dating back to September connected to the House impeachment inquiry. Over the weekend, Parnas’ counsel announced he had handed over records to the committees.

Trump has repeatedly attempted to distance himself from Parnas’ activities. In October, Trump told reporters, “I don’t know those gentlemen,” referring to Parnas and another associate. “That is possible I have a picture with them because I have a picture with everybody — I have a picture with everybody here. But somebody said there may be a picture with — at a fundraiser or somewhere so, but I have pictures with everybody. I don’t know if there’s anybody I don’t have pictures with. I don’t know them,” Trump said. Documents released Wednesday by the committee appear to confirm Parnas’ position. In a calendar entry from September, Parnas wrote, “Breakfast with President Trump in NYC,” the documents showed. The new records made public on Wednesday include voicemails, photographs, videos and messages that shed further light on the activities Giuliani undertook in Ukraine that ultimately led to the impeachment inquiry in Congress — including efforts to have Yovanovitch dismissed.On May 3, 2019, for example, Giuliani boasted to Parnas about his efforts to have Yovanovitch recalled from Kyiv.

“Boy I’m so powerful I can intimidate the entire Ukrainian government,” Giuliani wrote. “Please don’t tell anyone I can’t get the crooked Ambassador fired or I did three times and she’s still there.” Parnas also said former national security adviser John Bolton was “definitely involved” in Vice President Mike Pence’s mission to secure an agreement with Ukraine. “I know Mr. Bolton was definitely involved in the loop because of the firing of Maria Yovanovitch,” Parnas said. The vice president’s office in a statement Thursday morning said that Parnas’ claims of the vice president’s knowledge and involvement contradicts testimony of witnesses in the House inquiry. “Democrat witnesses have testified under oath in direct contradiction to Lev Parnas statements last night,” the vice president’s chief of staff Marc Short said in a statement. “This is very simple: Lev Parnas is under a multi-count indictment and will say anything to anybody who will listen in hopes of staying out of prison. It’s no surprise that only the liberal media is listening to him.”

The new statement is consistent with Pence and his office’s previous statements that the vice president had any knowledge or involvement in a scheme to pressure Ukraine to launch an investigation into Biden.Parnas and Giuliani also communicated about their efforts to pressure Ukraine’s leader to have former Vice President Joe Biden and his son, Hunter, investigated. Those efforts led to the impeachment inquiry in Congress. On the day after Trump’s phone call with Zelenskiy on July 25, Giuliani sent Parnas about “good news on Zelensky.” Three days later, on July 29, Giuliani wrote to Parnas again, “on way to WH,” referring to the White House. Giuliani then wrote to Parnas on Aug. 1, “I want their commitment that they will support a real, full investigation, I full (sic) agree,” Parnas replied.

At one point in Parnas’ communications, the president’s daughter, Ivanka Trump, was invoked. After an exchange that suggested she was to meet with President Trump, Victoria Toensing, a Washington, D.C.-based lawyer, wrote to Parnas that “POTUS stood us up and sent Ivanka to speak in his stead.” Parnas confirmed: “That’s what Rudy said.” Toensing did not reply to a request for comment. The White House has not directly addressed Parnas’ accusations that the president lied. Separate from the House impeachment probe, Parnas was charged in a criminal campaign finance case in the Southern District of New York. Accused of allegedly circumventing campaign finance laws against straw donations and foreign contributions, Parnas pleaded not guilty.