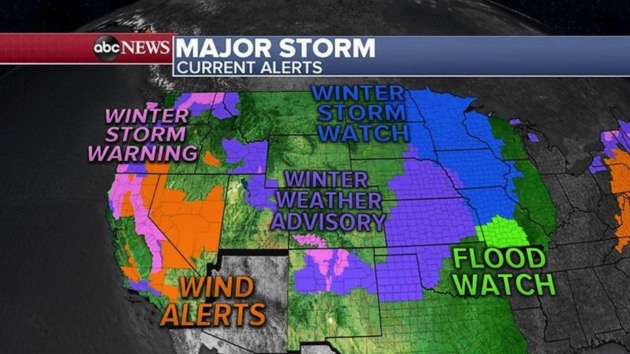 ABC News(NEW YORK) — The major storm that we have been talking about for days is here — it hit the Pacific Northwest Wednesday with 1 to 2 feet of snow and wind gusts to more than 80 mph.Some roads had to be shut down in Washington state due to the snow and wind.Because of the continuous snow in Washington, some people have been stranded for days. Twenty-two states are on alert ahead of the storm from California to Illinois.Thursday morning, the storm system is moving into Northern California with heavy rain in the San Francisco Bay area and heavy snow in the higher elevations.By Thursday afternoon and evening, the storm system will move into the Southern California and will bring rain to Los Angeles and San Diego, with snow in the higher elevations just outside of L.A.By Friday, the storm will move into the Central U.S., with heavy snow in the Twin Cities and snow and ice in Chicago, where winter storm watches have been issued for the Midwest. Heavy rain and thunderstorms are expected in the central Plains.By Saturday, the storm system will move into the Northeast with heavy snow inland and snow to rain for coastal major cities from Washington, D.C., to New York City and Boston.Major cities like Philadelphia, New York and Boston are not going to see too much snow, maybe 1 to 2 inches, but just inland some areas in northern Pennsylvania, Central New York and New England could see a foot of snow.Ahead of the storm, Arctic air is in place and wind chill warnings and advisories have been issued for the Midwest this morning.The wind chills this morning will be as low as -40. Most areas will see wind chills near zero and below.This cold shot of air is moving into the Northeast later tonight into tomorrow morning, with wind chills forecast to be in the single digits and even below zero. Copyright © 2020, ABC Audio. All rights reserved.