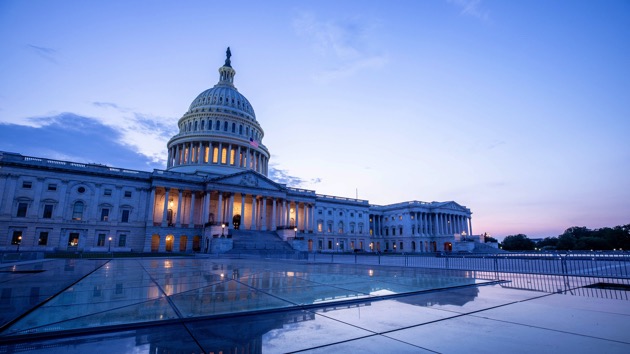 Stephen Emlund/iStock(WASHINGTON) — The Senate formally accepted the articles of impeachment against President Donald Trump shortly after noon on Thursday, after they were handed off by key members of the House, officially triggering only the third trial of a president in history. House managers, who were officially revealed on Wednesday, arrived on the Senate floor after walking silently across the Capitol to present the articles with House Intelligence Committee Chairman Adam Schiff taking the lead role.The Senate Sergeant at Arms called out: “Hear ye! Hear ye! Hear ye! All persons are commanded to keep silent, on pain of imprisonment, while the House of Representatives is exhibiting to the Senate of the United States articles of impeachment against Donald John Trump, President of the United States.”Schiff then read the articles accusing the president of abuse of power and obstruction of Congress as all 100 senators sat listening at their desks. Quoting the articles, he called Trump “a threat to national security” and said his conduct “warrants removal from office.” “Resolved that Donald J Trump is impeached for high crimes and misdemeanors,” Schiff, D-Calif., declared, adding, “Donald J. Trump has abused the presidency.” Schiff, citing the articles, said  Trump acted with “corrupt motives” by conditioning $391 million in military aid to Ukraine “for the purpose of providing vital military aid” for “corrupt personal benefit.”“President Trump has abused the power of the presidency in a manner subversive of the Constitution,” Schiff said, saying that the president “interposed the power of the Presidency” by stonewalling the House impeachment inquiry. Schiff made note of the officials — by name — who defied House subpoenas for their testimony, including some of the witnesses Senate Democrats now want, like acting White House Chief of Staff Mick Mulvaney.Once Schiff finished, the House managers were dismissed and left the Senate chamber. With the articles “exhibited” — or read into the record — Chief Justice John Roberts will now travel from the Supreme Court at 2 p.m. to be sworn in to preside over the Senate impeachment trial. Roberts will be sworn in by Republican Sen. Chuck Grassley, the president pro tempore — the highest ranking senator who presides over the Senate in the absence of the vice president.Once Roberts is sworn in, it’s expected that he will swear in all 100 senators. Senate Majority Leader Mitch McConnell said earlier in the week that he expects the Senate impeachment trial to kick off in earnest on Tuesday, Jan. 21.All senators are expected to be in attendance for the duration of the trial, which is expected to last at least two to three weeks, according to several senators. According to the trial decorum guidelines, when Roberts arrives every single day, senators will have to “silently rise” at their desks and remain standing until Roberts takes his seat.Senators are expected to do the same when Roberts leaves the chamber every day, as well. Senators will have to refrain from speaking to their neighboring senators in the chamber and will have to remain seated throughout the duration of the trial every day. Cellphones and other electronic devices will not be allowed in the chamber — senators and any staff allowed inside will be asked to keep their devices in a separate room outside the chamber. Senators will have to refer to Roberts as “Mr. Chief Justice.”The House voted Wednesday afternoon to formally send the impeachment charges against Trump. The House resolution officially appointed the seven managers, named by House Speaker Nancy Pelosi Wednesday morning, who will act as prosecutors presenting the Democrats’ case.”This is a very important day for us,” Pelosi said Wednesday. “Time has been our friend in all this,” she added, noting what she called the new “incriminating” evidence that has surfaced in the month since the House impeachment vote on Dec. 18, including new documents and other evidence from Lev Parnas, an associate of Rudy Giuliani, the president’s personal lawyer. Schiff said the new evidence, revealed by the House just Tuesday night, must be considered by the Senate. It’s undecided at this point if the Senate will hear from witnesses or consider new evidence during the trial.