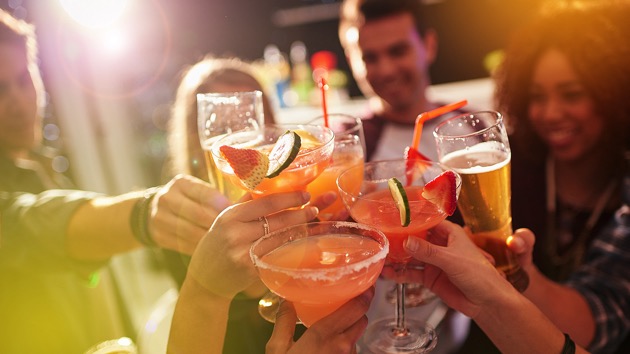 Peopleimages/iStock(ATLANTA) — The number of drinks Americans are consuming per bingeing episode has increased dramatically, according to a new study.The annual number of binge drinks among adults who reported binge drinking jumped on average from 472 in 2011 to 529 in 2017, a 12% increase, according to the study published Thursday by the U.S. Centers for Disease Control and Prevention (CDC).Binge drinking is defined by the CDC as a “pattern of drinking that brings a person’s blood alcohol concentration to 0.08 grams percent or above.”That typically means consuming five or more drinks in a two-hour period for men and four or more drinks in a two-hour period for women, according to the CDC.One in six adults in the U.S. binge drinks about four times a month, consuming about seven drinks per binge, and binge drinking is twice as common among men than among women, according to the CDC.In the latest study, the CDC found that increases in binge drinking were most prominent in people over the age of 35 and those with lower educational levels and household incomes.Drinking a steady amount of alcohol in a short amount of time has a different impact on your body than drinking, for example, one glass of wine each night over the course of one week, according to Dr. Jennifer Ashton, ABC News chief medical correspondent and a board-certified OBGYN.”If you look at the effects of alcohol in a short-term, acute period, there can be memory blackouts, there can be accidents — we’re talking about things from falls, burns, motor vehicle accidents, even homicides — increase in risky behavior, like sexual behavior and acute tissue damage, mostly to the liver,” she said Friday on “Good Morning America.” “This is a significant issue and so our radar is up to take a look at it.”Ashton stressed the importance of “self-awareness” for people who consume alcohol.For women, a moderate alcohol intake per week is defined as seven servings of alcohol or less. For men, it is 14 servings of alcohol or less per week, according to Ashton.One serving of alcohol is defined as five ounces for wine and just one-and-a-half ounces for hard alcohol, far less than what is typically served in bars, restaurants and people’s homes.