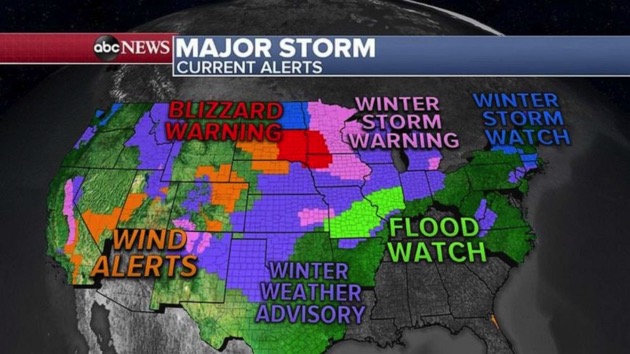 ABC News(NEW YORK) — A major storm continues to march east Friday morning with alerts issued across the country from California to Massachusetts.The storm brought several feet of snow from Washington state to the California mountains and winds gusts over 100 mph. There is so much snow in some towns in Washington that people are stranded in their homes.The storm has also brought heavy rain to the San Francisco Bay area, causing flash flooding.There are alerts Friday morning from California to Massachusetts, with blizzard warnings issued for North Dakota, Nebraska, Iowa and Minnesota.As of Friday morning, the storm system is moving out of the Rockies and into the heartland, with freezing rain and sleet from western Texas to Kansas and Missouri, causing icy roads that are leading to accidents.Friday afternoon and evening, the storm system will strengthen and bring heavy snow and blizzard conditions to the Upper Midwest with snow even reaching Chicago.The heaviest snow will fall in the western Great Lakes, while Chicago will change to ice and rain overnight as some warmer air tries to work its way into the strengthening storm.By Saturday, snow will move into the Northeast and even into Philadelphia, New York City and Boston.By evening hours, snow will change to rain in Philadelphia and New York, but stay as all snow from northern Pennsylvania into New England.The next few days will see additional snow and ice accumulation with this storm.The heaviest snow will fall from Minneapolis to Michigan and into New England, where some areas could see more than 10” of snow.Lower snowfall amounts are expected in Chicago, with maybe 2 to 5 inches. Around a half a foot is expected in Detroit, with up to a foot of snow possible in parts of New England’s higher elevations.Philadelphia and New York City will see maybe 1 to 3 inches, which will then change to rain. In Boston, 3 to 4 inches of snow is possible.