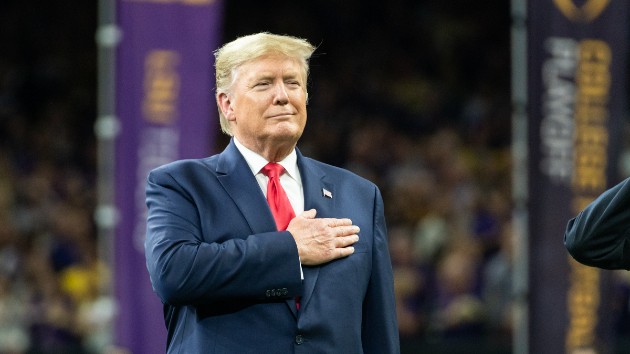 Official White House Photo by Shealah Craighead(WASHINGTON) — President Donald Trump, while honoring the college football national champions from Louisiana State University amid his Senate trial on Friday, called out Democrats, saying “they are trying to impeach the son of a bitch.” Trump made the comment as he invited the team back to the Oval Office for photos at the Resolute Desk, after he said some “good presidents and some not so good presidents” have sat at the desk.”But they got a good one now,” Trump said. “Even though they are trying to impeach the son of a bitch. Can you believe that?”While touting the success of the record-breaking LSU Tigers, he also made sure to highlight his own successes as president — including the signing of the partial trade agreement with China on Wednesday and the Senate passage of a new trade deal between the United States, Canada and Mexico on Thursday. He continued to talk up the U.S. military — claiming his administration catches terrorists much like a football team would take out their opponents.“We’ve got the greatest military … we’ve taken out the terrorists just like your football team would have taken out those terrorists,” he said. “So we’re doing good.” Trump also mentioned a record “all-time high” for the U.S. stock market, what he’s called an economic victory. “So that will be 149 times in the past three years,” he said, turning to LSU head coach Ed Orgeron. “That’s not bad. Coach, that’s good, right?”The president did talk football at the ceremony, giving shoutouts to various LSU players such as Heisman Trophy winner and quarterback Joe Burrow, cornerback Derek Stingley Jr. and wide receivers Ja’mar Chase and Justin Jefferson. He also went down a list of some of the most well known plays and games of the season. When last season’s champions, Clemson University, visited to the White House in March, Trump fed them fast food from McDonald’s and Chick-fil-A. He said the team ate so much food “we didn’t know what the hell to do.”The LSU Tigers gave the president a jersey with “Trump” on the back, displaying the number 45. “I thought he was giving me the Heisman trophy … He’s just giving me a jersey,” Trump joked. Louisiana federal and state lawmakers, including Sen. Bill Cassidy, Reps. Mike Johnson, Garret Graves and Steve Scalise, Attorney General Jeff Landry and Secretary of State Kyle Ardoin, also attended the ceremony. Copyright © 2020, ABC Audio. All rights reserved.

‘Boyfriend loophole’ addressed in Senate gun deal: What to know