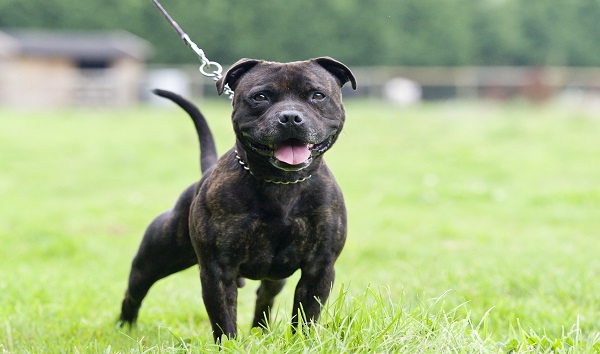 iStock/dageldog(MILLVILLE, N.J.) — A pit bull rescued from a dogfighting ring in Canada is ready to protect and serve as the newest K-9 arson detection officer and the first of his kind in the U.S.Tyler VanLeer, a New Jersey firefighter, had a stroke of genius when he suggested the addition of an arson detection K-9 unit at his local firehouse. The dog, named Hansel, is the first of its breed to hold the title in the country.VanLeer, who has been with the Millville Fire Department for eight years, told ABC News the plan came together with the support of his fire chief, a local police officer and the Throw Away Dogs Project.”It was like an instant bond — his little head poked around the corner and it was like an instant connection. You could feel it,” VanLeer said about his first meeting with Hansel at the firehouse.”Hansel and I started a 16-week academy on Sept. 30 with the New Jersey Police K-9 Association and we did all scent work to become a single purpose arson detection K-9,” VanLeer said. “He was trained, or imprinted, on 14 different ignitable liquids and graduated on Jan. 18.”VanLeer said Sunday was Hansel’s first official day on the job in the firehouse, but the 4-year-old pup was already well adjusted to his environment.”The firehouse is no strange place to him. He was there with me prior to the academy, getting used to the bells and whistles going off and everything,” he said. “He’s extremely sociable, everybody loves him and there are no problems whatsoever.”The newly graduated K-9 officer was first rescued by the Ontario Society for the Prevention of Cruelty to Animals (OSPCA) in 2015 and was later rehabilitated by Throw Away Dogs Project in 2018. Hansel stayed with the rescue organization for one year before being sent to the Millville Fire Department.”This step is so important for this misunderstood breed as I don’t think there is any other pit bull arson detection K9s in whole country,” Throw Away Dogs Project founder Carol Skaziak told ABC News.Skaziak said she has trained and placed three other dogs from the dog-fighting ring in Ontario and they too are now K-9 officers.”The journey has been really fun and it’s just going up from here,” VanLeer said.VanLeer said Hansel lives with his family at their home and has everything he needs in the firehouse including an outdoor kennel, heaters and plenty of dog food.”Chief Michael Lippincott has been extremely helpful, he made sure everything I needed was already there,” VanLeer said. “When he met Hansel, the same day as I did, he automatically knew it was gonna be a great idea too.”VanLeer also hailed Millville-based K-9 patrolmen officer John Butschky for his help as “the middle man” who got things off the ground and answered all of his K-9 related questions.”He was a huge asset on getting me in contact with Carol (Skaziak) and getting the ball rolling. He has 20 plus years of K-9 experience and a lot of connections in the K-9 officer world,” he said.Hansel’s transition from rescue to officer was “really smooth” with everyone involved, Van Leer said.Throw Away Dogs Project, a Philadelphia-based nonprofit, is known for taking in misunderstood dogs, training them to become police dogs, finding them jobs around the country and donating them free of charge. Copyright © 2020, ABC Audio. All rights reserved.