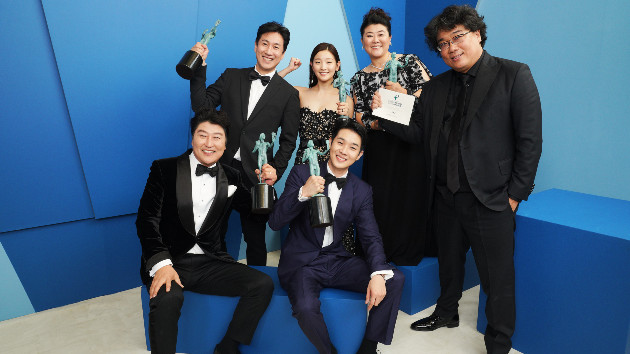 Terence Patrick/Getty Images for Turner(LOS ANGELES) — Bong Joon-ho’s Parasite took home the night’s top prize — Outstanding Performance by a Cast in a Motion Picture — at Sunday night’s 26th Annual SAG Awards, becoming the first foreign film in the history of the SAG Awards to win that honor.  It beat out Bombshell, The Irishman, Jojo Rabbit and Once Upon a Time…in Hollywood.

“Although the title is Parasite, I think the story is about co-existence and how we can all live together,” Kang-ho Song, one of the actors in the movie said through a translator, before joking, “but to be honored with the best ensemble award, it occurs to me that maybe we haven’t created such a bad movie.”

Elswhere, Netflix’s The Crown took home the Actor for Outstanding Performance by an Ensemble in a Drama Series; best male and female actor in a drama series went to Peter Dinklage for Game of Thrones and Jennifer Aniston for The Morning Show, respectively. In the drama category, Sam Rockwell and Michelle Williams won best male and female actor honors, respectively, both for FX’s Fosse/Verdon.

The winners on the movie side were also varied: Renée Zellweger and Joaquin Phoenix each added to their Golden Globe victories, winning best male and female actor awards for their respective rolls in Joker and Judy; as did Brad Pitt for his supporting role in Once Upon a Time…in Hollywood. Laura Dern won Outstanding Performance by a Female Actor in a Supporting Role for Marriage Story.

Leonardo DiCaprio presented the Lifetime Achievement Award to Robert De Niro, who gave the evening’s only politically charged speech, defending his right to speak out on matters he felt are important.

“There’s right and there’s wrong and there’s common sense and there’s abuse of power,” he said. “And as a citizen I have as much right as anybody — an actor, an athlete, a musician, or anybody else — to voice my opinion.”

“And if I have a bigger voice because of my situation, I’m going to use it whenever I see a blatant abuse of power,” he added to thunderous applause.

De Niro’s statement is a stark contrast to the fiery opening speech made by Ricky Gervais, who hosted the Golden Globes on January 5.  The British comedian chided the potential winners about being “woke” and encouraged, “If you do win an award tonight, don’t use it as a platform to make a political speech. Right? You’re in no position to lecture the public about anything.  You know nothing about the real world.”

‘Everything Everywhere All at Once’ leads nominations for 95th Academy Awards

‘Avatar: The Way of Water’ notches sixth week at #1 with $20 million weekend