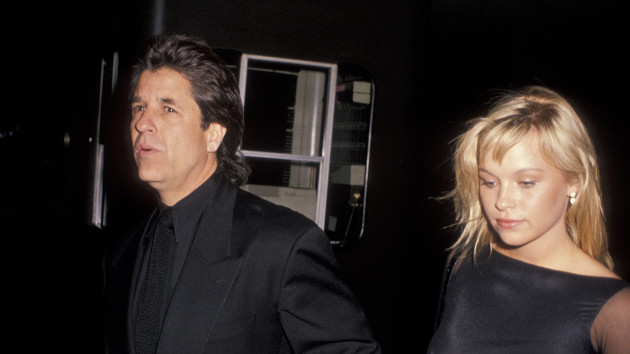 Peters and Anderson in 1989/ Photo by Ron Galella, Ltd./Ron Galella Collection via Getty Images(LOS ANGELES) — It’s said that love waits for no one, but if you’re veteran producer Jon Peters, it does.  The Hollywood Reporter notes he tied the knot with Pamela Anderson in a private ceremony in Malibu on Jan. 20 — some 30 years after they first dated.

It is the fifth marriage for both the former Baywatch star and the producer of movies including Batman and two versions of A Star Is Born — the earlier incarnation of which starred his former flame, Barbra Streisand.

“There are beautiful girls everywhere. I could have my pick, but — for 35 years — I’ve only wanted Pamela,” the 74-year-old filmmaker notes, recalling that when they first met, Anderson, now 52, was 19. “In 30 years, our age difference won’t mean so much,” he said he told her at the time.

“Pamela has never seen her full potential as an artist,” he gushed to the trade. “She has yet to shine in a real way. There is much more to her than meets the eye, or I wouldn’t love her so much.”

For her part, Anderson literally waxed poetic about their relationship. “He’s been there all along/Never failed me/I’m ready now and he’s ready too,” in her poem she sent to the trade about the “original ‘bad boy"” of Hollywood. “I’m a lucky woman/Proof God has a plan,” she concluded.Anderson was previously married to Mötley Crüe drummer Tommy Lee — he of their infamous sex tape — with whom she has two adult sons. She was also married to Kid Rock and producer Rick Salomon, whom she married twice.