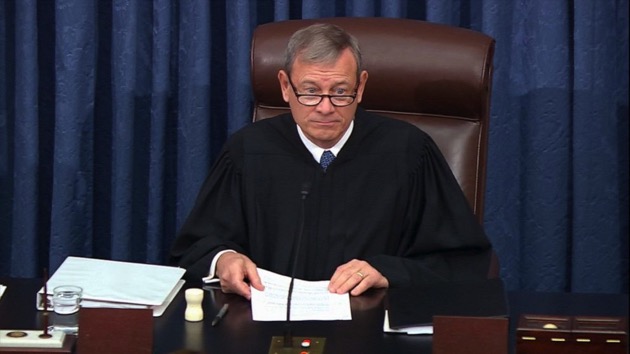 ABC News(WASHINGTON) — Chief Justice John Roberts, presiding over the Senate impeachment trial, scolded both President Donald Trump’s defense team and House managers after a tense exchange between the two sides in the early hours of Wednesday morning.As both sides debated one of several proposals from Democrats seeking additional witness testimony, Rep. Jerry Nadler, one of the House impeachment managers, accused Trump’s counsel of making false statements and restricting witness testimony.“So far I’m sad to say I see a lot of senators voting for a cover up, voting to deny witness — an absolutely indefensible vote, obviously a treacherous vote,” Nadler said at the bottom of the midnight debate hour.He went on to accuse Senate Republicans of voting “against an honest trial” and “against the United States.”Taking his turn at the mic, White House counsel Pat Cipollone fired back directly at Nadler.“The only one who should be embarrassed, Mr. Nadler, is you for the way you’ve addressed this body,” Cipollone said. “This is the United States Senate. You’re not in charge here.”Trump’s other lead impeachment attorney, Jay Sekulow, accused the House impeachment managers of trying “to shred the Constitution on the floor of the Senate.””The Senate is not on trial,” Sekulow said. “The Constitution doesn’t allow what just took place.”Sekulow continued Cipollone’s charge against Nadler with a more aggressive tone before the chief justice spoke up at the end of the hour.“I think it is appropriate at this point for me to admonish both the House managers and president’s counsel in equal terms to remember that they are addressing the world’s greatest deliberative body,” Roberts said. “Those addressing the Senate should remember where they are.”The comment was the first time the chief justice stepped into the rhetorical fray during a that lasted some 13 hours. Copyright © 2020, ABC Audio. All rights reserved.