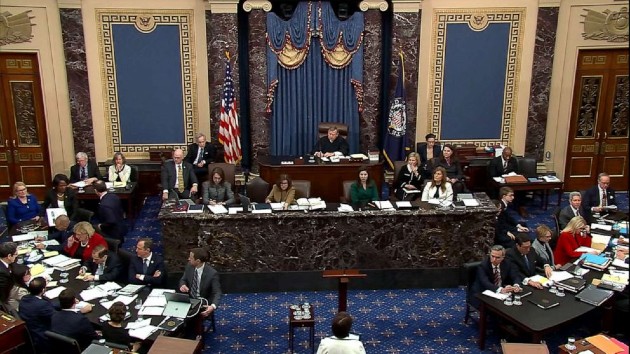 ABC News(WASHINGTON) — House Democrats on Thursday were expected to continue to make their case in favor of removing President Donald Trump from office, as the Senate impeachment trial continues. Democrats were expected to start up again around 1 p.m. Eastern time and speak well into the evening. The focus by the House impeachment managers though is expected to shift a bit. While Wednesday was spent laying out much of the evidence, Democrats were now expected to begin making the case that Trump’s actions violate the Constitution. Here are three things to know about what has happened in the impeachment trial already: 1) Democrats threw cold water on the idea of offering up Biden as a witnessThe Washington Post late Tuesday reported that some Senate Democrats were privately discussing a possible deal with Republicans — a subpoena for former White House adviser John Bolton or other officials with first-hand knowledge of the president’s actions, in exchange for the subpoena of former Vice President Joe Biden or his son, Hunter.That deal would be an abrupt departure from the Democratic position that any witnesses must have information relevant to the investigation.Senate Democratic Leader Chuck Schumer told reporters Wednesday it wouldn’t happen. “That trade is not on the table,” said Schumer.Likewise, Rep. Adam Schiff, the lead House Democratic impeachment manager, said the goal of the Republicans is merely to “smear Biden” and Democrats wouldn’t support it. “Trials aren’t trades for witnesses,” said Schiff, D-Calif. 2) Democrats argued Trump was trying to ‘cheat’ the 2020 election Democratic remarks shifted on Wednesday away from combative objections on procedure to laying out their case that Trump was trying to influence the upcoming election and was not acting on behalf of the U.S.Schiff, a former prosecutor, used provocative terms to do so — describing Trump’s aides as “agents” and referring to their roles in the president’s “scheme.” Both Schiff and Rep. Jerry Nadler, another impeachment manager, accused Trump of using his power as president to taint Biden in the eyes of American voters. “As we will show the president went to extraordinary lengths to cheat in the next election,” said Nadler, D-N.Y.Sens. Mitt Romney of Utah, Cory Gardner of Colorado, Susan Collins of Maine and Lisa Murkowski of Alaska — four senators who Democrats are hoping will side with them in a vote to demand more witnesses and subpoenas — took detailed notes and appeared to be paying close attention. Schiff, at various points, seemed to direct his remarks directly at them, urging senators to put aside their politics and consider what will happen after Trump leaves office. “What are we going to say with the president who is from a different party who refuses the same kind of subpoenas?” he asked. “People are cynical enough as it is about politics … cynical enough without having us confirm it for them,” he later added. Near the end of the day Wednesday, Schiff said the senators should be able to know “who else was involved in this scheme.” “You should want the whole truth to come out,” he said.3) Other senators seemed bored, Trump tweeted, and the president’s lawyer denied a ‘quid pro quo’ While the Senate trial on Wednesday was the Democrats’ chance to pull together their most compelling evidence, it also seemed to be a bit of a slog for senators as the arguments stretched well into the evening.Deprived of their electronic devices, several senators paced the back of the room. Sen. Rand Paul, R-Ky., worked a crossword puzzle. At least two senators — Republicans Tom Cotton of Arkansas and Richard Burr of North Carolina — ordered glasses of milk, testing reports that Senate rules specifically would allow the dairy drink (and water) on the floor but nothing else. One of Trump’s personal lawyers, Jay Sekulow, vowed to challenge the allegations that there was any “quid pro quo” with Ukraine — an investigation into the Bidens in exchange for military aide. He wouldn’t say whether he thought his side would need all 24 hours of arguments allotted. But Sekulow promised to wrap up arguments in an “orderly” and “systematic” fashion and said the president would be acquitted. “Are we having an impeachment over a phone call or is this a three-year attempt to take down a president that was duly elected by the American people?” Sekulow said.

Trump, the defendant, was out of town for much of Wednesday, returning to Washington after attending the World Economic Forum in Switzerland. It appeared though the president was paying attention to Schiff’s accusation that Trump pressured Ukraine into investigating the Bidens. “NO PRESSURE,” Trump tweeted as the trial continued. Copyright © 2020, ABC Audio. All rights reserved.