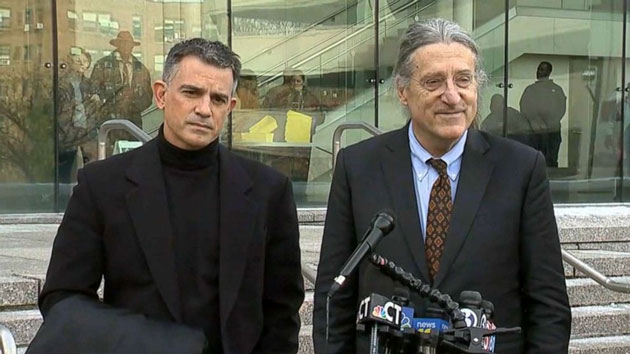 WTNH-TV(NEW CANAAN, Conn.) — A Connecticut man charged with his estranged wife’s murder was harshly criticized by a judge who said he violated the terms of his $6 million bond by stopping at a makeshift memorial for his presumed-dead spouse and removing items his lawyer said were meant to taunt him.Fotis Dulos had his work-release privileges revoked and was ordered to remain under strict house arrest after Judge Gary White on Thursday ruled Dulos shouldn’t have visited the memorial, which had been placed near his home by supporters of his wife, Jennifer.White issued a stern warning to Dulos that if he violates the conditions of his release again, his bond will double to $12 million.”What he did was stupid. Don’t do it again,” White said during a hearing in Stamford/Norwalk Superior Court.Under the new conditions of his bond, Dulos is confined to his home in Farmington, Connecticut, and must continue to wear an electronic GPS ankle bracelet. He previously had been permitted to leave his home for work or to shop for groceries.Richard Colangelo, the Stamford/Norwalk State’s Attorney, filed a motion earlier this week accusing Dulos of breaking the conditions set for his bond.”This is in violation of the terms of his release,” Colangelo argued in his motion.Following the court hearing, Dulos’ attorney, Norm Pattis, said the items Dulos removed from the memorial were placed there to taunt his client.”We have been following various web pages ostensibly devoted to supporters of Jennifer. They are encouraging people to place items outside of his home. I’m not sure what that’s about. It might be harassment in any other context,” Pattis told reporters, as Dulos stood silently next to him outside the courthouse.”I remind the supporters that Jennifer is missing. She may be presumed dead as far as they’re concerned. We’ve yet to see persuasive evidence of that,” Pattis said.Dulos was arrested and charged on Jan. 7 with murder, capital murder and kidnapping in the disappearance of Jennifer Dulos, the mother of his five children. He pleaded not guilty to the charges.Fotis Dulos’ girlfriend, Michelle Troconis, also was arrested and charged with conspiracy to commit murder. Kent Mahwinney, an attorney and a friend of Fotis Dulos, also has been charged with conspiracy to commit murder.Jennifer Dulos, 50, went missing May 24 amid the former couple’s contentious custody battle.Investigators allege Jennifer Dulos was killed inside her own home and garage in New Canaan, Connecticut. Her body was never found.State police have alleged in court papers that Fotis Dulos was “lying in wait” for Jennifer Dulos at her home and a violent assault took place in the garage, where bloodstains were found.Authorities allege Jennifer Dulos was killed at her home May 24 between 8:05 a.m. and 10:25 a.m., after she returned from taking her children to school, according to an arrest warrant.On the day of her disappearance, surveillance footage showed someone in a hoodie riding a bike toward Jennifer Dulos’ home. The bike was later found in the trash.Police claim Fotis Dulos bound Jennifer Dulos with zip ties, put her inside her own car and cleaned the garage, according to an arrest warrant.The medical examiner categorized the incident as “homicide of violence” that would “likely include some combination of traumatic, blunt-force injuries such as a bludgeoning/beating, and/or sharp-force injuries such as a stabbing/slashing,” according to Troconis’ arrest warrant.During Thursday’s hearing, Pattis waived Fotis Dulos’ right to a probable cause hearing, saying his client seeks a speedy trial.”We are confident in our odds at trial because we know what we know,” Pattis told reporters after the hearing. “The state is trying to put together a case that Mr. Dulos is responsible for that murder, or for that disappearance, and we take the position there is insufficient evidence to conclude that she’s even dead.”Pattis said he hopes the trial would begin as early as September, but conceded he’s worried about the public perception of his client.”But there are 12 good people who we don’t yet know and that will be the jurors in this case,” Pattis said. “When we have the jury and we have an orderly courtroom proceeding by people committed to deciding this case by the rule of law, we are extremely confident in our odds.” Copyright © 2020, ABC Audio. All rights reserved.