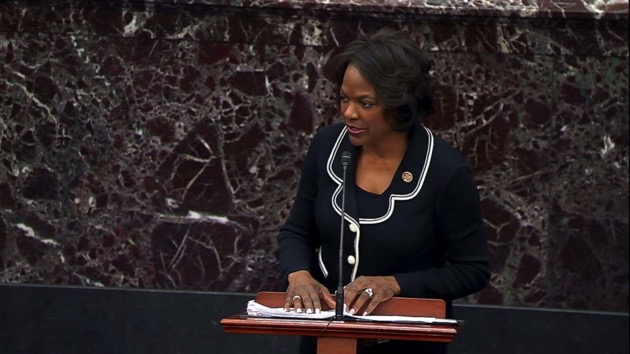 Val Demings speaks on the Senate floor during the impeachment trial of President Donald Trump, Jan. 21, 2020, in Washington, DC. – (ABC News)(NEW YORK) — Florida Rep. Val Demings, a House manager during the Senate impeachment trial against President Donald Trump, joined ABC’s The View, on Wednesday morning, reinforcing her dedication to ensuring a fair trial and not letting the defense turn the trial into a “circus.””I believe the president’s team — and the president of course — is trying to turn this very serious trial into a circus,” Demings told the hosts. “We’re going to do everything we cannot to let them do this.”She went on to remind the senators of the oath they’ve taken to do impartial justice.”What has been shocking thus far is that we know that every senator in the chamber took an oath that he and she would administer impartial justice,” she said when pressed by the hosts on Tuesday’s trial. “Based on the arguments put on by the president’s team and based on the votes as we saw them yesterday, I am hoping that every senator before this trial is over will remember the oath that they’ve taken and take it very seriously.”Demings continued, “The american people deserve to see a fair trial and we are going to do everything on our side to make sure they get one.”Senate Majority Leader Mitch McConnell’s resolution — or rules for the conduct of the Senate impeachment trial — and amendments were brought to the floor for hours of debate on Tuesday.Demings reflected on her law enforcement background during her speaking time, rebuking the president’s actions listed in the second article of impeachment — or obstruction of Congress — questioning the president’s attempt to conceal evidence of his conduct.”President Trump did not take these extreme steps to hide evidence of his innocence or to protect the institution of the presidency,” she said. “As a career law enforcement officer, I have never seen anyone take such extreme steps to hide evidence allegedly proving his innocence. And I do not find that here today.”She continued to direct her arguments toward the Republican senators , and the table occupied by Trump’s legal team.”The president is engaged in this cover up because he is guilty and he knows it,” she said. “And he knows that the evidence he is concealing will only further demonstrate his culpability.”She added, “Notwithstanding this effort to Stonewall our inquiry, the House amassed powerful evidence of the president’s high crimes and misdemeanors.”Demings also made an argument in favor of an amendment to subpoena the State Department for documents related to Ukraine.She didn’t back down during Tuesday’s debate on her support for witnesses and evidence to be admitted during the trial, as is custom for other trials.”Let me say witnesses that are called, we want to make sure that we see witnesses because every trial does, and documents because every trial does,” she said, adding that she would only call material witnesses who have first-hand knowledge of the president’s July 25 call with Ukraine President Voldymyr Zelenskiy.McConnell did make one surprise concession during Tuesday’s debate — agreeing to admit evidence into the record.As a member of the House Intelligence and Judiciary committees, Demings actively participated during the impeachment inquiry process, even questioning witnesses before each panel.She is also one of the first women to serve as a House trial manager during a Senate impeachment trial — as this marks only the third trial in U.S. history.House Speaker Nancy Pelosi said she chose the impeachment managers based on their experience as litigators and investigators with an emphasis on “comfort level in the courtroom” and “making the strongest possible case to defend our constitution.”While Demings may be the only trial manager without a law degree, she is also the only one to serve in law enforcement — serving 27 years in the Orlando Police Department. During her tenure at OPD, she became the first female police chief in 2007.”Our job is to communicate that the president clearly abused the office. He abused the sacred trust of the American people,” Demings told The View hosts. “He betrayed his oath, and then he obstructed everything that Congress tried to do to investigate the president of the United States. The president using his office to try to coerce a foreign power into cheating.”The trial resumes Wednesday afternoon, as the House managers begin their opening arguments.Demings said she understood why some of the senators were tired at the end of the day, as the debate went on for more than 12 hours.”Our job is to continue to advance the job down the field,” she said “Yesterday, we did a pretty good job of doing that.”Copyright © 2020, ABC Audio. All rights reserved.